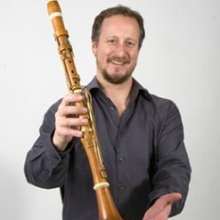 Born into a family of musicians, Mark Simons was surrounded by classical music throughout his childhood. He studied classical music at Marianopolis College, McGill and Temple Universities, and then continued developing his expertise in different styles of music including modern, baroque, jazz and klezmer. His passion for chamber music has led to collaborations with many Canadian string quartets including Arthur Leblanc, Bozzini and Alcan. He has also performed with the Casal Quartet from Switzerland and has worked regularly with the Daponte String Quartet in the United States. He recently toured eastern Canada with soprano Suzie Leblanc and pianist, Robert Kortgaard.

A closer look at the baroque and classical repertoire has inspired Simons to explore the fascinating sonorities of period instruments such as the chalumeau family (a baroque cousin of the clarinet) and the classical clarinet. He has been invited as soloist and chamber musician with Montreal ensembles including Les Boréades, Ensemble Caprice, le Quatuor Franz Joseph, ARION orchestre baroque, Les Idées Heureses, and Clavecin en Concert. Simons has been performing the Mozart Clarinet Concerto on a reconstruction of a Grenser classical clarinet made by Rudolf Tutz. This season features performances of the concerto with Ensemble Caprice under the direction of Matthias Maute, and with l’Orchestre Symphonique de la Vallée-du-Haut-Saint-Laurent under Daniel Constantineau. Mark will also join Eric Hoeprich and the Arion Baroque Orchestra in the Concerto for Two Chalumeaux by Telemann. Mark has two CD’s on the Analekta label on which he plays bass and alto chalumeau: “Viole D’Amour” with Helene Plouffe, and “Telemann et les Gitans” with Matthias Maute.

Mark Simons has also performed as soloist with l'Orchestre Symphonique de Québec, and I Musici de Montréal. He has been heard in recital and chamber music in Belgium, the United States, Colombia, Switzerland and Canada. He teaches at both McGill University and Marianopolis College.