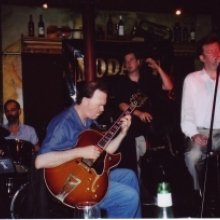 Born in Montreal, Canada, Greg Clayton was an early starter in music playing his first gigs at the age of 12 and his musical path led him to the downtown Montreal jazz scene. Greg says “I was lucky enough to catch the tail end of what was the great jazz era in Montreal. I frequented the various clubs such as Rockhead’s Paradise, The Jazztek, Hotel de Province, Congo Room and the Black Bottom meeting and eventually playing with many of our legendary players here in town.”

His first jazz influences on record were Charlie Parker and Wes Montgomery. But just as important for Greg, “the possibilty of seeing and hearing Nelson Symonds and/or Ivan Symonds on almost any night of the week for years was an opportunity I took full advantage of.”

Greg was nominated for the 2008 Canadian national jazz awards in the Acoustic Band Of The Year category.