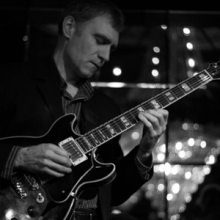 Greg Amirault is originally from Nova Scotia has been living in Montreal since 1987, where he is an active member of the local jazz scene. He has a Diploma in Jazz Studies from St. Francis Xavier University, as well as a Bachelor’s and Master’s degree in Jazz from McGill University. He was the recipient of the “Grand Prix de Jazz General Motors” award from the Montreal International Jazz Festival in 2000, with the Eduardo Pipman Quartet. He also won a “Prix d’Opus” for Concert-of-the-Year with the Altsys Jazz Orchestra under the direction of Maria Schneider. He has recorded with the Eduardo Pipman Quartet, singer George Evans, and has his own recording entitled “Acadian Folk Song” which features original music. He has studied with Greg Clayton, Roddy Elias and Ben Monder.