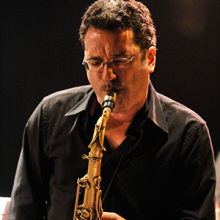 Born in Ottawa, Frank Lozano began his studies in Toronto with Pat LaBarbera and then in Boston with Jerry Bergonzi. He has toured extensively across Canada from St.John Newfoundland to Dawson city Yukon as well as across Europe.

In 2006, Frank was awarded a studio residency grant from the Conseil des Arts et des Lettres Québec for a six month stay in New-York, which he spent practicing and composing. Upon returning, he released his first CD as a leader: FrankLozanoGroup – Colour Fields – with Jim Lewis on trumpet, Kim Ratcliffe on guitar, John Geggie on bass,and Jean Martin on drums. He has since released a new CD with his most recent project, Frank Lozano Mtl 4, with François Bourassa on piano, Thom Gossage on drums, and Adrian Vedady on bass.