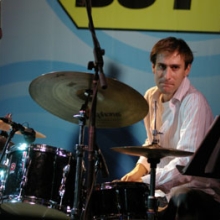 Drummer Jim Doxas was born in Montréal, Canada, into an artistically vibrant family and established himself early on in his career as a versatile percussionist.Heavily influenced by rock, jazz, Motown and world music, his credits on various recordings range from drummer, percussionist and composer. In addition, he is also an established recording engineer and a lecturer at McGill University. Doxas is a popular featured artist at jazz festivals worldwide and has worked with John Abercrombie, Joe Lovano, Hank Jones, Edward Simon, Dave Binney and Maria Schneider.

Writing for AllAboutJazz.com, Robert J. Lewis describes his playing:
“Through the power of his startling invention, he makes the case that percussion can be every bit as performative as a lyrical instrument. What distinguishes Doxas’ approach to improvisation is that he refuses to play it safe, allowing the moment—and not received wisdom—to dictate the kind of framework that will contain, shape and guide the piece under consideration. He is astutely committed to the belief that significant music is always distinguished by what is left unsaid, the gaps of which inspire him to produce a highly original vocabulary.”

During the last several years, his playing with Oliver Jones has been recognized with Felix and Juno Awards in Canada, and his participation in the song “Belleville Rendez-Vous” from the film The Triplets de Belleville received nominations for Grammy and Academy Awards.