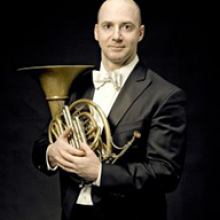 Denys Derome is associate principal horn with the OSM. He studied horn at the Conservatoire de musique du Québec à Montreal and with John Zirbel at McGill University. He won first prizes at the National Music Festival (1996) and the OSM (1996). As a soloist, he has performed with the Victoria Symphony, the Montreal Symphony Orchestra and the Kitchener-Waterloo Symphony. He also participated in various chamber music concerts broadcast on Radio-Canada. Mr. Derome teaches horn at McGill University.