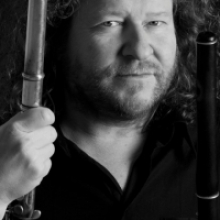 David Gossage is one of Montreal’s most respected and experienced musicians. Once cited by Gazette music critic as “Montreal’s secret weapon” multi-instrumentalist David switches from flute to guitar, whistles and harmonica with ease and in virtually all styles of music.

He attended the Royal Conservatory of Music in Toronto and later received his degree from Concordia in Montreal specializing in theory and composition. Over the years David has played in all styles of music including African, classical, rock and funk, but he is probably best known for his jazz and Celtic playing. He has headed his own groups in both these styles and is considered one of the pioneers of the acid jazz scene here in Montreal hosting the weekly SQUEEZE Nights at the metropolis and opening for Jamiroquai, KRS-one and M’Shell Ndegeocello to name a few.