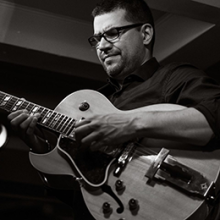 Jazz guitarist and composer, Carlos Jiménez is a very active musician in the Montreal jazz scene. In the past few years, he has shared the stage with some of the most expressive names of Canadian jazz. From the new generation of jazz musicians such as Josh Rager, Dave Watts, Fraser Hollins, Joel Miller and Michel Berthiaume, to the established jazz veterans such as Kevin Dean, Andre White, Frank Lozano, Rémi Bolduc, Brian Hurley, Joe Sullivan, Steve Amirault and Don Thompson. His versatility and ability to play various styles on both electric and classical instruments has made him a first choice guitarist for various projects: the Joe Sullivan Big Band, the Brian Hurley Quartet, the Daniel Lessard Trio, the Jean-Nicolas Trottier Tentet, the Jacinta Luis Quintet and the Dorothée Berryman Ensemble. His first recording as a leader entitled Undercurrents was released in March 2011.

Along with his work as a sideman, Carlos Jiménez was featured on various recordings and radio shows such as Jazz Beat and Canada Live, produced by the CBC. He has also collaborated to the soundtrack of the Oscar winning short movie The Danish Poet, produced by the National Film Board of Canada. In 2009, he received a studying grant from the Canada Council for the Arts to study with American guitarist Adam Rogers, in New York. Carlos Jiménez is currently on faculty at the Schulich School of Music of McGill University and serves as Jazz Area Coordinator at the McGill Conservatory. He holds a Master’s degree and a Bachelor’s degree in Jazz Performance from McGill University.