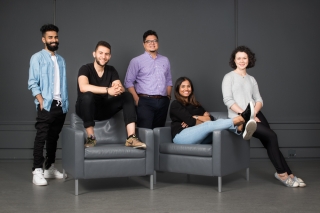 Montreal, Quebec, July 18, 2017 - The John Dobson Foundation has announced a donation of $2 million – its largest gift to McGill yet – to fund the McGill X-1 Accelerator program run by the McGill Dobson Centre for Entrepreneurship. The gift will support the X-1 program, now in its third year, as it grows to support and promote entrepreneurship across McGill.

Ari Kiriazidis, President of the John Dobson Foundation, stated, “the Foundation is delighted to continue Dobson’s long-standing relationship with McGill with what represents one of the largest gifts ever granted by the Foundation’s Board. The Board is extremely proud to be associated with one of the most prestigious universities in Canada through the Dobson Centre and its various programs.”

Randy Kelly, John Dobson’s long-time partner and Chief Executive Officer of Formula Growth, as well as Chairman of the Dobson Foundation, noted,  “McGill was always close to John’s heart and he would be very pleased with the continued commitment.”

Launched in 2015, the McGill X-1 Accelerator is an intensive 10-week summer program designed to accelerate the growth of later-stage McGill startups toward investment readiness and launch. The program runs annually from June to August and is open to teams, of which at least one member must have an affiliation to McGill, either as a student, a recent graduate, or a faculty or staff member. This year’s program has accepted eight McGill teams who are building their business on an idea based on technology or science.

The overall curriculum builds upon the MIT startup methodology of Disciplined Entrepreneurship, an integrated and proven framework for developing an innovation-driven product towards launch.

The McGill X-1 Accelerator culminates with a series of Demo Day events in Montreal, Toronto, Boston, New York and San Francisco, where the teams will have the opportunity to pitch their ideas to groups of McGill alumni, entrepreneurs and investors.

The donation from the Dobson Foundation comes at a time of crucial development for the McGill Dobson Centre for Entrepreneurship, which resides in the Desautels Faculty of Management. Dean Isabelle Bajeux-Besnainou of Desautels remarks, “through the vision and generosity of the John Dobson Foundation, the McGill Dobson Centre for Entrepreneurship is affirmed as the leading hub for entrepreneurship on campus. In classrooms, research labs, and across the University, McGill is full of ideas and talented individuals driven to innovate. Thanks to this donation, the McGill X-1 Accelerator will catalyze our community of innovators and entrepreneurs.”

About the John Dobson Foundation

In 1986, John Dobson established The John Dobson Foundation to help educate the public with respect to investing, the free enterprise system and entrepreneurial activities in Canada. One of the first activities of the Foundation was the creation of the Dobson Centre for Entrepreneurship at McGill University in 1989. The Dobson Foundation has supported entrepreneurial development at more than a dozen other Canadian universities, as well as numerous other community entrepreneurial efforts including being one of the original sponsors of Advancing Canadian Entrepreneurship (now Enactus Canada). The Dobson Foundation involvement with entrepreneurship over 30 years has resulted in the establishment of a large regional and national network of educators and small business interveners creating unprecedented synergy and cooperation. The Foundation also supports many Canadian economic Think Tanks that help Canadians understand the strength of the Free Enterprise system. It also has had an important role in educating young Canadians in the power of compounding returns through sound investing and saving principles.

About the McGill Dobson Centre for Entrepreneurship

About the Desautels Faculty of Management

Founded in 1906, the Desautels Faculty of Management at McGill University is ranked as one of the world’s top international business schools by BusinessWeek, Canadian Business, Forbes and The Economist. The Faculty’s innovative programs and historic reputation for excellence continue to attract the finest students and the most prominent professors from around the globe, as well as the most demanding recruiters from the world’s top employers.