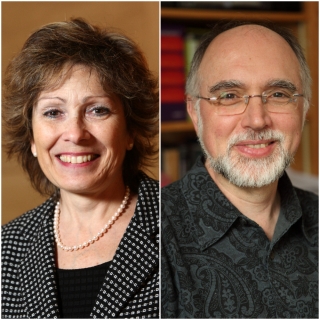 Edith Hamel is recognized for her pioneering work on the regulation of brain perfusion under normal and pathological conditions. Her findings provided unprecedented information on the cellular basis of brain imaging techniques that use hemodynamic signals to map changes in neuronal activity. Her discoveries also unraveled the mechanisms of action of specific antimigraine drugs, and of cardiovascular therapies with memory benefits in models of Alzheimer’s disease and vascular dementia.

Robert Zatorre’s innovative contributions to auditory cognitive neuroscience include discoveries about the processing of speech and vocal signals in the brain, and reorganization of this system after sensory loss. He is perhaps best known for his work on the neural mechanisms of music perception and performance, including plasticity related to musical training, and the discovery that musical pleasure is mediated by dopaminergic mechanisms in the brain’s reward circuitry.

Edith and Robert are two of 89 new Fellows, including one Foreign Fellow and two Specially Elected Fellows, to be elected this year. These individuals have diverse backgrounds and disciplines, and they have been elected by their peers in recognition of outstanding scholarly, scientific and artistic achievement.

Founded in 1882, the Royal Society of Canada (RSC) recognizes scholarly, research and artistic excellence. It comprises the Academies of Arts, Humanities and Sciences; in addition to Canada’s first national system of multidisciplinary recognition for the emerging generation of Canadian intellectual leadership, The College of New Scholars, Artists and Scientists. Click here to view a complete list of newly elected Fellows and their nomination citations.

Congratulations again to Edith and Robert on this wonderful achievement.