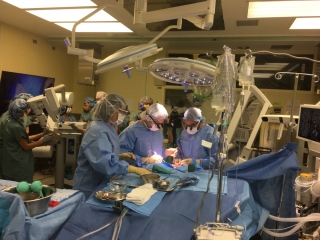 Providing excellent care and the latest research to help patients

The Brain Tumour Foundation of Canada estimates that 27 Canadians a day are diagnosed with a brain tumour and 55,000 are living with one. This Brain Tumour Awareness Week we recognize the toll this disease takes on patients and the work being done to improve their quality of life.

Our Neuro-Oncology Clinic is a leading centre for clinical care, receiving approximately 3,000 brain tumour patient visits a year, and it is the only adult centre in Quebec to achieve a Level 4 accreditation rating (the highest possible rating) from the province.

Research at The Neuro is reaching to the cellular level to discover what causes these dangerous growths and what we can do to stop them.

While progress has been made, treating brain tumours remains a great challenge. Here is a look at some of the people at The Neuro who are making strides in fighting this disease.

“Brain tumour is a catchall phrase that describes any mass that’s growing in the brain,” says Dr. Kevin Petrecca, chief of neurosurgery at the McGill University Health Centre and Group Leader of The Neuro’s Brain Tumour Research Centre. “Within each brain cancer are multiple types of cells and each of those cells has its own genomic backbone. They express different genes and different proteins. They have different rates of growth and sensitivities. That’s one reason we have such a difficult time treating this disease.”

A brain cancer researcher as well as a neurosurgical oncologist, Dr. Petrecca and his laboratory team look to uncover the origin of brain cancers from the moment when cancerous cells first appear among healthy cells. By analyzing each cell individually, the laboratory has been able to show the entire evolution of the cancer — how it originates from one normal cell, divides, and evolves.

“This process is very similar to the way that a normal brain evolves,” notes Dr. Petrecca. “The cellular developments of glioblastoma actually mimic the development of the normal brain.”

Over the last several years, Dr. Petrecca and his colleagues have made a major investment in using their cellular research data to identify new therapeutics.

“What controls those first cells that are born within the cancer? It turns out that some of these regulatory mechanisms are normal processes of brain stem cells. We’ve examined new avenues of treating brain cancers by identifying, characterizing and targeting those cells in early glioblastoma stem cells. We’ve tested some of those in pre-clinical models, and they worked very well.”

Dr. Petrecca has also made a significant contribution to the surgical removal of brain cancers. It is impossible to distinguish cancer cells from healthy cells by conventional visual means or by magnetic resonance imaging. With Frédéric Leblond of Polytechnique Montréal, Dr. Petrecca created a device that combines Raman spectroscopy with artificial intelligence to detect brain cancer cells during surgery. An initial phase of clinical trials involving the Raman probe was completed at The Neuro this year. The data were quite positive. A second phase at The Neuro and at two other international sites is expected to start later this year.

Most recently, on Oct. 11, 2018 Dr. Petrecca enrolled his first patient in an international clinical trial testing intra-operative radiotherapy for brain cancer. The Neuro is the only Canadian site participating in the trial.

Stifani’s laboratory is investigating glioblastoma, the most common and aggressive form of brain tumour in adults. Nationwide headlines were made in 2015 when Gord Downie, lead singer of the Canadian rock band The Tragically Hip, received a diagnosis of a late-stageglioblastoma. He died 20 months later. Stifani examines the properties of cancer stem cells that are thought to determine glioblastoma’s recurring behaviour and its resistance to therapy. He has described molecular mechanisms that activate and repress genes in ways that promote cancer growth. His findings have provided new insights into how these mechanisms contribute to glioblastoma development.

Dr. Diaz is a neurosurgeon who has conducted basic research into a type of skull base tumour called chordoma. His latest research, which appeared in September in the American Journal of Pathology, revealed a genetic instability in the tumour as it continued to grow. Dr. Diaz postulates that this instability might explain why the chordoma is highly resistant to standard chemotherapy and radiation treatment. He is developing a gene therapy approach that targets a gene in the tumour called brachyury. This gene is also found in other cancer cells, so that a therapy targeting brachyury might also be effective in treating other brain tumours.