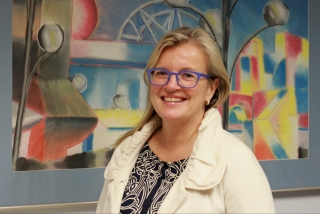 The Neuro is recognized as a major Canadian center for ALS research and patient care. During June, designated ALS Month, The Neuro redoubles its efforts to inform the public and the media about amyotrophic lateral sclerosis (ALS), and urges all to help support ALS research.

Amyotrophic lateral sclerosis, commonly called Lou Gehrig’s disease after the baseball player who died of it, occurs as a result of the death of motor nerve cells in the brain and spinal cord. These cells control our voluntary movements. As more of these cells die, muscles weaken to the point of total paralysis. Death typically occurs less than five years following diagnosis, but a small percentage of patients live for ten years or even longer. Fewer than one in ten ALS patients has a family history of ALS.  About 3,000 Canadians have ALS. There is no cure.

Dr. Angela Genge is a neurologist and director of The Neuro’s ALS Clinical Research Program, which handles about 300 patients annually. She is also director of The Neuro’s Clinical Research Unit, where trials of four ALS drugs are being undertaken involving about 50 patients. Dr. Genge has conducted research into the possibility that ALS might be linked to certain activities such as football.

Dr. Rami Massie, a neurologist at the ALS clinic, provides clinical care to patients from the moment of diagnosis to end-of-life care. His research activity includes participating in The Neuro’s ALS clinical drug trials as well as a separate project in which he is investigating the link between ALS and heavy metals.

Dr. Guy Rouleau, Director of the Montreal Neurological Institute, was a member of a team that identified the first ALS gene in the 1990s. His laboratory at The Neuro studies ALS genes to determine the causes of both familial and sporadic ALS. Dr. Rouleau and his laboratory colleagues are looking at possible somatic mutations of cells in ALS genes that are known to lead to the outbreak of the disease. The laboratory’s activity includes making blood tests of people who either show ALS symptoms or are members of families with a history of ALS. The DNA from the blood is studied in an attempt to identify new causative genes. Recently the laboratory has tried to develop cell models of patients’ motor neurons in culture as a way of studying ALS. Such cell models could be used to validate treatments and therapies.

Dr. Bernard Brais, a neurogeneticist, co-directs The Neuro’s Rare Neurological Diseases Group. His own laboratory examines the bases of neurogenetic disorders with founder effects in Quebec, some of which manifest motor neuron involvement. His work has played a significant role in identifying causal genes for several neurological disorders including describing new hereditary conditions.

Research: Her laboratory seeks to understand why motor neurons become vulnerable to ALS damage and to find ways to boost defence mechanisms so that these neurons remain connected and function longer. Dr. Durham uses cell culture and mouse models that express genetic mutations causing the familial forms of ALS. A common abnormality in ALS that develops in motor neurons is retraction of processes called dendrites that connect to other spinal cord neurons and coordinate messages controlling movement. Recently, Dr. Durham’s laboratory identified underlying mechanisms regulating gene transcription that could contribute to those changes. Her group is testing drugs that target those mechanisms, both alone and in combination with other drugs that help cells deal with toxic proteins. Dr. Durham is a member of the ALS Society of Canada board of directors. She actively promotes ALS research and raises public awareness about the disease.

Dr. Heidi McBride specializes in the biology of mitochondria, which are cell organelles that break down sugar and fat to generate energy. Her work looks at how mitochondria are regulated in both healthy and diseased organisms. Her research also looks to explain how the cell clears itself of damaged mitochondria. Dr. McBride aims to demonstrate how mitochondrial dysfunction might contribute to ALS onset.

Dr. Peter McPherson uses molecular, structural and cellular techniques to conduct research into the function of nerve cell proteins. He has shown how certain proteins appear to contribute to neurodegenerative and motor neuron diseases. He has demonstrated in a mouse model how one protein, Scyl1, which helps to transport other nerve cell proteins, can undergo mutation that generates motor neuron degeneration similar to ALS in humans. Dr. McPherson also works on DENN domain protein models. One such protein is the product of the most common ALS mutation, the C9orf72 gene. By identifying the DENN domain’s partners that interact with C9orf72, he hopes to discover unknown aspects of ALS.

Dr. Eric Shoubridge investigates genes that underlie mitochondrial dysfunction, which is thought to contribute to ALS and to other neurodegenerative diseases.

Dr. Stefano Stifani’s research seeks to explain how motor neurons control breathing, mastication and swallowing. One main goal is to understand how motor neuron circuits are assembled and work to regulate respiratory development. The information that his laboratory uncovers could be used some day to generate respiratory motor neurons out of pluripotent stem cells. Such generated respiratory neurons would open the road to a closer examination of motor neuron pathophysiology. Such neurons could also be used in mass screening of potential new therapeutic compounds. These compounds could help to develop ways to repair damaged motor circuits in ALS and in other motor neuron diseases.

Dr. Hiroshi Tsuda examines genetic pathways and molecular mechanisms that underlie ALS. His research seeks to develop new therapeutics that could delay the onset and progression of ALS.  His laboratory has created models that resemble phenotypes linked to ALS. His research is advancing our understanding of ALS and providing data that can be used to devise new treatments.

Scientists have speculated for a long time that the pathogenic process of ALS might somehow involve mitochondria, which are organelles that have an essential energy-producing function in most cells. Recently, the laboratory of a mitochondrial specialist at The Neuro, Eric Shoubridge, began to investigate the first ALS gene linked to a mitochondrial protein.

“Whatever this complex is doing, it seems to be involved in the neurodegenerative process,” says Dr. Shoubridge. “If we find out what’s happening there, we might see implications for more than just ALS.”

The mitochondrial organelle has a double membrane and the ALS gene called CHCHD10 codes for a protein found in the space between the membranes. This protein forms a complex with another gene, CHCHD2, which was recently described as a risk factor for Parkinson’s Disease.

The CHCHD10 gene has been found in several families with ALS, some of whom showed symptoms of fronto-temporal dementia, which is common in ALS. Such dementia is a result of progressive nerve cell death either in the brain’s frontal or temporal lobes. The nerve cell loss demonstrates various symptoms including personality and behaviour changes, speech problems and muscle or motor deterioration.

“There are 20 or so genes known to be related to the common genetic causes of ALS. Only three or four of them are widely investigated. Most of the other known ALS genes are rare variants, like the CHCHD10.”

A doctoral candidate in Dr. Shoubridge’s laboratory, Isabella Straub, is working to determine whether the disease results from too little of the protein complex involving CHCHD10, or whether the mutant protein might produce a toxic effect on cells.

“We’re hoping to shed light on some of the other genetic causes of ALS. Maybe the more common causes of ALS might somehow be interacting with these proteins,” says Dr. Shoubridge.

ALS clinical care at The Neuro

The ALS clinic at The Neuro is considered a model of multidisciplinary clinical care for ALS patients and their families. Employing advanced technology, the ALS clinical research program develops and tests new ALS therapies in collaboration with the Canadian ALS Clinical Trial Consortium (CALS), and with researchers abroad.

The multidisciplinary team at the Neuro’s ALS Clinic provide a complete set of services to ALS patients, including consultation and follow-up for patients diagnosed with ALS or suspected cases of ALS, and access to respiratory therapy, physiotherapy, occupational therapy, inhalation therapy, specialized nursing, social work, pastoral services, speech language therapy, and nutritional information. The program has become a reference center for these patients because of its expertise to use, for the right patient at the right time, tracheostomy, ventilatory assistance at home, BIPAP and gastrostomy, and the presence of a genetic counselor and clinic coordinator. Patients can also participate in clinical trials. The clinical research team is integrated directly into the clinic, for seamless access to clinical trials.

The Tony Proudfoot Fund awards funds to young scientists at The Neuro who focus their research on ALS. In 2016, the recipient was Dr. Audrey Dangoumau, who recently received her PhD form the University of Tours, France. As a postdoctoral fellow working in the laboratory of The Neuro’s director, Dr. Guy Rouleau, Dr. Dangouman conducts research on motor neurons’ death process.

The late Tony Proudfoot, former defensive back of the Montreal Alouettes of the Canadian Football League, established the Fund before he died of ALS in 2010.  Diagnosed with ALS in 2007, he devoted great effort to increase public awareness about ALS and to raise funds for ALS research.

The Montreal Neurological Institute and Hospital — The Neuro---is a unique academic medical centre dedicated to neuroscience. Founded in 1934 by the renowned Dr. Wilder Penfield, The Neuro is recognized internationally for integrating research, compassionate patient care and advanced training, all key to advances in science and medicine. The Neuro is a research and teaching institute of McGill University and forms the basis for the Neuroscience Mission of the McGill University Health Centre.  Neuro researchers are world leaders in cellular and molecular neuroscience, brain imaging, cognitive neuroscience and the study and treatment of epilepsy, multiple sclerosis and neuromuscular disorders. For more information, visit www.theneuro.ca.