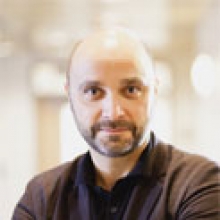 Sylvain Baillet graduated from Ecole Normale Supérieure Paris-Saclay in Applied Physics (France) and obtained his PhD summa cum laude in Physics from University of Paris (Paris-XI). Sylvain has an international career profile, having held positions in France, the USA and Canada. He was a Research Associate at the Signal and Image Processing Institute of the University of Southern California before joining the Centre National de la Recherche Scientifique (CNRS, France) as a tenured Principal Investigator in 2000. He became the head of the Brain Imaging group at the Cognitive Neuroscience & Brain Imaging CNRS Laboratory in 2005, at La Salpetriere University Hospital in Paris. In 2008, he took a position as Associate Professor of Neurology & Biophysics at the Medical College of Wisconsin and became the founding Scientific Director of the MEG Program at Froedtert Hospital, in Milwaukee (USA). He joined the Montreal Neurological Institute in 2011.

Scientific Output – Sylvain is a global leader in brain imaging and multimodal electrophysiology for systems neuroscience. He has been recognized by multiple international Career Achievement Awards and the Tier-1 Canada Research Chair of Neural Dynamics of Brain Systems (2018) for his “achievements on the world map of cutting-edge neuroimaging research.” He has been on 13 journal Editorial Boards. Sylvain developed pivotal methods for brain imaging and quantitative electrophysiology, with an emphasis on magnetoencephalography (MEG) for time-resolved brain imaging. These advances also applied to EEG – a technique widely used in research, clinics and wearable devices. He produced highly cited good-practice guidelinesand contributed authoritative reviews of his field e.g., commissioned by Nature Neuroscience  or endorsed by the International Federation of Clinical Neurophysiology. He consistently maintains a diverse funding portfolio (NSERC, CIHR, SSHRC, CFI, Compute Canada, Brain Canada, FRQS, FRQNT, NIH and private donors; gross total: >$36M; 14 active grants, 8 as PI or co-PI). He produced 110 articles, 9 book chapters (14 as primary, 42 as senior author; 53 in the past 7 years), 200 conference proceedings, 3 international patents, 180 invited lectures (90 international) and publishes in leading journals, from Neuroscience to Computer Science, and top-tier outlets e.g., Nature Communications, Nature Neuroscience, Neuron, PLoS Biology and PNAS. The quality of his research output was recognized by the French Academy of Sciences (“outstanding publication in Biology”) and a high level of citations: >11,700 citations, with 4 articles in the Top 1% of most-cited publications in Neuroscience & Behaviour (Web Of Knowledge). As a mentor and educator, He has trained 130 students (74 grads) and 13 post-docs with backgrounds from Neuroscience to Computer Science; 20 have obtained faculty positions worldwide.

Promotion of Open Science – Sylvain contributed major open-science resources: he co-founded the Open MEG Archives (OMEGA) in 2015; the first open-access repository of MEG data (700 international users, 50 journal articles). He also shares his tools and methods with open-source software. His team hosts the software integration of Brainstorm, an international NIH project, which has grown a community of 27,600 user accounts. Since 2011, 2,000 students and faculty members have attended 40 training workshops worldwide, and >1,600 journal articles cite Brainstorm as the primary tool for data analysis.

Management of Research – Sylvain founded and led several research and clinical imaging platforms: the MEG program he created in 2008 was recognized by US health-insurance partners and is now part of the routine pre-surgical workup of dozens of epilepsy and brain-tumor patients annually. The MEG unit he founded at McGill in 2012 has become the second busiest scanner on campus, after 3T MRI. He has led the McConnell Brain Imaging Centre, the largest of its kind in Canada, for which he recruited 6 new PI leaders and 9 HQPs and raised $6.4M in infrastructure grants in 4 years.

Industrial Transfers – Sylvain has experience with the management of patented intellectual property and successful industrial transfers. For example, his patented MRI work for acute stroke evaluation was transferred to the biomedical industry, used in national clinical trials, obtained CE and FDA certifications, and is now marketed worldwide.