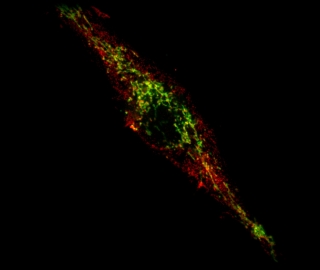 A team of scientists led by Dr. Michel Desjardins from the University of Montreal and Dr. Heidi McBride from the Montreal Neurological Institute and Hospital (MNI) at McGill University have discovered that two genes associated with Parkinson's disease (PD) are key regulators of the immune system, providing direct evidence linking Parkinson's to autoimmune disease.

Using both cellular and mouse models, the team has shown that proteins produced by the two genes, known as PINK1 and Parkin, are required to prevent cells from being detected and attacked by the immune system.

When PINK1 and Parkin are dysfunctional, as is the case in a subset of Parkinson’s patients, cells display small parts of proteins at their surface, known as antigens, derived from mitochondria. The presence of these antigens at the cell surface causes the activation of immune cells called lymphocyte T cells. These T cells, which can enter the brain, have the ability to destroy any cell displaying the mitochondrial antigens on their surface.

Parkinson’s is caused by the death of dopamine-producing neurons in the brain. An overactive immune system due to dysfunctional PINK1 and Parkin genes could explain why dopaminergic neurons die in Parkinson’s patients.

This indicates that Parkinson’s may be one of many autoimmune diseases, including multiple sclerosis, Type 1 diabetes, rheumatoid arthritis, and lupus. An autoimmune disease is one in which the body’s own immune system attacks healthy cells.

Researchers suspected that mitochondria, organelles within cells that are responsible for the production of energy and other metabolites, play a role in Parkinson’s. It was widely believed that mitochondria become damaged in Parkinson’s patients, creating a toxic build-up of broken mitochondria that eventually leads to neuron cell death. However, it has been difficult to provide evidence that this is effectively happening in animal models.

The new findings of the Desjardins/McBride teams linking PD to autoimmune mechanisms, published in the prestigious journal Cell on June 23, have been validated in a mouse model of Parkinson's disease where PINK1 or Parkin are absent.

“Clinicians have shown that the immune system is activated in the brain of PD patients,” says Dr. Diana Matheoud, a postdoctoral fellow from the University of Montreal and the article’s first author. “Our study explains how an attack by the immune system may be responsible for the destruction of dopaminergic neurons during the disease. We are currently testing whether autoimmune mechanisms lead to the loss of dopaminergic neurons in mice, and developing systems to extend our study to human neurons."

“Antigen presentation was not believed to play a direct role in Parkinson's disease,” says McBride. “While most laboratories are following the trail of the ‘toxic mitochondria’ model, our path led us to observe Parkinson's disease from a different point of view. Our approach, centered on the immune system, led us down a different road where we were able to observe that autoimmunity is likely to play an important role in the progression of the disease.”

Now that a link has been established between two key genes involved in the pathology of Parkinson’s disease and autoimmune mechanisms, the next step is to develop drugs that can limit the presentation of mitochondrial antigens. Remarkably, the mechanism by which mitochondrial antigens are presented involves a process of vesicle formation, originally described by the McBride group, offering molecular targets for the development of new drugs in an effort to block this process.

The researchers’ findings may also lead to better treatments for other diseases.

“We think that our study is paradigm shifting because we have identified a new biological pathway linking mitochondria to immune mechanisms in Parkinson’s disease. This opens the possibility to use therapies based on modulation of the immune system, something already done for the treatment of other diseases,” says Desjardins. “Interestingly, the role played by PINK1 and Parkin in limiting the presentation of mitochondrial antigens may not only regulate a process that impact Parkinson’s disease, but may also affect other autoimmune diseases like diabetes and lupus, and primary biliary cirrhosis, where a link to mitochondrial antigen presentation has been observed.”

“This paper suggests an entirely novel mechanism by which these recessive, inherited mutations may lead to neurodegeneration,” says Jon Stoessl, Professor and Head of Neurology at the University of British Columbia & Vancouver Coastal Health, and former Director of the Pacific Parkinson’s Research Centre. “There has been much interest in the potential role of inflammation in PD. Previous studies on Parkin and PINK1 have focused on disruption of mitochondrial housekeeping functions. While the current findings may clearly be related, they suggest an entirely novel approach to the development of targeted therapies. It should be remembered that these are rare causes of Parkinson's disease and the relevance to dominantly inherited and sporadic forms of disease remains to be determined.”

This research was funded with the help of the Canadian Institute for Health Research and the Canadian Research Chairs program of Canada.

Université de Montréal and its two affiliated schools, École Polytechnique (engineering) and HEC Montréal (business) are amongst the world's top 100 universities, according to international rankings. Founded in 1878, the campus today has over 66,000 students and 2,600 professors, making Université de Montréal the second largest university in Canada. Its students are drawn to the university by its deep roots in cosmopolitan Montreal and in consideration of its tenacious dedication to its international mission. umontreal.ca/english