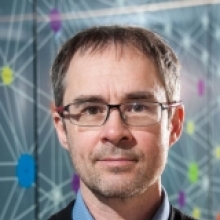 Jean-Baptiste (JB) Poline is an Associate Professor in the Department of Neurology and Neurosurgery at McGill; the co-Chair of the NeuroHub and Chair of the Technical Steering Committee for the Canadian Open Neuroscience Platform (CONP) at the Montreal Neurological Institute & Hospital (the NEURO); and a Primary Investigator at the Ludmer Centre for Neuroinformatics & Mental Health.

Among its early pioneers, Poline is a leading researcher in the fields of fMRI, imaging genetics research, and the neuroinformatics technologies that make a big-data approach to neuroscience possible. Through his research, he has developed several novel data-analysis techniques in statistical modeling and inference for functional brain imaging (fMRI, PET) with applications to large imaging genetic datasets. He also co-developed the most widely-used fMRI software to date: Statistical Parametric Mapping (SPM).

Ongoing innovations in genome-wide association studies and next-generation sequencing have helped identify some of the genetic factors underlying both neurological and mental disorders. Polines research in brain imaging methods, specifically fMRI, has advanced this research by providing unique ways to explore the biological consequences of molecular changes induced by genetic variants on brain development—the effects of genetic variations on brain structure, function, and connectivity.

A strong proponent of data sharing and publishing, Poline led the biostatistics and bioinformatics components of the IMAGEN study, the first European multi-centre functional and structural genetic neuroimaging study in mental health. Internationally, Poline is a leader and longtime member of several international organizations guiding neuroimaging and neuroinformatic developments, notably, the International Neuroinformatics Coordinating Facility and the Organization for Human Brain Mapping. He is also the co-founder and co-editor-in-chief of Frontiers in Brain Imaging Methods, which not only aims to advance novel brain imaging methods but to address reproducibility issues as well.

Poline obtained an engineering degree (1983-88) in computer sciences and electronics in Paris, France. He completed a Masters in Biomathematics (1989-90) and a PhD in Image Analysis and Biostatistics (1990-93) at the Université Paris Diderot (Paris VII), France. He undertook several research fellowships (1994-96) at the Medical Research Council in England; McGill University in Canada; and the University College London in England. In 2003, he completed his ‘Habilitation a diriger des Recherches’ accreditation for research supervision (2003) at the Université Pierre et Marie Curie (Paris VI), France. Following this, he held several leadership positions advancing statistical modeling, methodical development, and imaging genetics, including Group leader (1997-2006) at the Orsay, Service Hospitalier Frédéric Joliot; Program and Projects Coordinator (2007-2010) at the NeuroSpin Imaging Center; and Chair (2007-2011) of the NeuroSpin Imaging Genetics Research Program. He was also a Senior Scientific Researcher in the Brain Imaging Center at the University of California, Berkeley (2012-17).