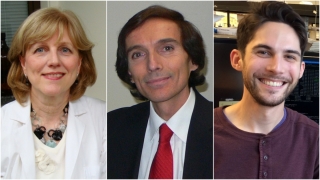 Three MNI researchers have received grants from the ALS Society of Canada worth a total of more than $2 million.

On November 22, The ALS Society of Canada announced 12 exciting new research projects being funded in 2017 through the ALS Canada Research Program, which is supported by ALS Societies across Canada. The research being funded includes a multi-year study of a promising drug combination, three trainee grants that will help to nurture the next generation of Canadian ALS researchers currently pursuing their PhDs, two projects that explore how ALS treatments could be delivered through the bloodstream, and an initiative that seeks to understand why the muscles of the eyes are often more resistant to ALS as other muscle groups shut down. The announcement was made in partnership with the Brain Canada Foundation, which through the Canada Brain Research Fund (with financial support from Health Canada) is co-funding the largest grant of $1.8 million through matching funds committed following the Ice Bucket Challenge.

Approximately 3,000 Canadians are living with amyotrophic lateral sclerosis (ALS), a disease that paralyzes the body, taking away the ability to move, talk, swallow and eventually breathe. Each year about 1,000 Canadians are diagnosed with the disease and a similar number die. Most people die within two to five years of their ALS diagnosis because the disease has no cure and few treatment options.

“ALS is an incredibly complex disease, but the research community is making tremendous headway and has come very far with very little in comparison to annual funding levels of diseases that have treatment options,” says Dr. David Taylor, Vice President of Research, ALS Canada. “For the ALS Canada Research Program this has only been possible because of the generosity of donors, partnerships with provincial ALS Societies across Canada, and organizations like Brain Canada, which by matching donations made through the Ice Bucket Challenge has essentially doubled Canada’s ALS research investment over the past several years.”

Combined with research grants jointly awarded by ALS Canada and Brain Canada in 2015 and 2016, the grants awarded in 2017 are putting to work the $20 million earmarked for Canadian ALS research following the Ice Bucket Challenge that in 2014 raised unprecedented awareness for the disease and funds for ALS charities including ALS Societies across Canada. With Brain Canada’s commitment of matched funds now complete, the ALS Canada Research Program will soon return to its historic funding levels with $1.5 million to $2 million in research grants awarded each year.

“Canadians responded generously to the Ice Bucket Challenge, and by matching the $10 million earmarked for research through our partnership with Health Canada, Brain Canada doubled the impact of this generosity,” said Inez Jabalpurwala, President and CEO, Brain Canada Foundation. “Since 2015, in partnership with the ALS Canada Research Program, we have funded 20 grants for novel, outside-the-box research; nine grants for collaborative, translational research projects that will move discovery from the lab to the clinic; and five grants that enable the next generation of researcher professors to start or continue research in promising areas of investigation. While the focus of all these research investments remains ALS, Brain Canada has brought its one system approach, whereby researchers from other areas were encouraged to apply their knowledge, and every discovery carries the potential to impact other neurodegenerative disorders which share common underlying mechanisms with ALS.”

Of the research grants announced on Nov. 22, the $1.8-million project co-funded by ALS Canada and Brain Canada will seek to find out whether a promising drug combination can address misfolded proteins, one of the defining biological characteristics of ALS. It was awarded to a research team led by Dr. Heather Durham from the Montreal Neurological Institute and Hospital of McGill University, with collaborators Dr. Josephine Nalbantoglu (McGill University); Dr. Richard Robitaille (Université de Montréal), and Dr. Chantelle Sephton (Université Laval).

The other 11 projects were funded through the ALS Canada Research Program through two different grant competitions as a direct result of donations and partnerships with ALS Societies across Canada including 40% of net proceeds from the WALK for ALS fundraising events that take places across the country. Among them is a project by Dr. Stefano Stifani of the MNI, which will examine if changes in communication processes between motor neurons and the immune cells of the nervous system after an ALS diagnosis could help to identify new treatment targets. This project was awarded $124,930. Jay Ross, a PhD student in the lab of Dr. Guy Rouleau of the MNI, was awarded $75,000 to determine if whole genome sequencing could reveal new areas of genetic mutations that make some people more likely to develop ALS.

The funding of these research projects follows a rigorous scientific assessment by global ALS experts who evaluated a larger pool of applications to identify the projects that are grounded in scientific excellence and have the potential to most quickly advance the field of ALS research in order to develop effective treatments. The scientific evaluation was observed by people who have personal experience with ALS.

About Brain Canada and the Canada Brain Research Fund
Brain Canada is a national registered charity headquartered in Montreal that enables and supports excellent, innovative, paradigm-changing brain research in Canada. For nearly two decades, Brain Canada has made the case for the brain as a single, complex system with commonalities across the range of neurological disorders, mental illnesses and addictions, brain and spinal cord injuries. Looking at the brain as one system has underscored the need for increased collaboration across disciplines and institutions, and a smarter way to invest in brain research that is focused on outcomes that will benefit patients and families. Brain Canada’s vision is to understand the brain, in health and illness, to improve lives and achieve societal impact.

The Canada Brain Research Fund is a public-private partnership between the Government of Canada and Brain Canada, designed to encourage Canadians to increase their support of brain research, and maximize the impact and efficiency of those investments. Brain Canada and its partners have committed to raising $120 million, which is being matched by Health Canada on a 1:1 basis for a total of $240 million. For more information, visit www.braincanada.ca