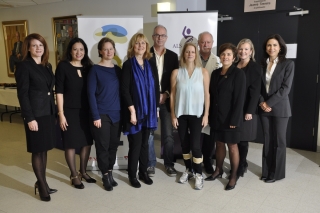 On November 19 2015, marking the anniversary of the announcement of the 2014 ALS Ice Bucket Challenge results and partnership between ALS Canada and Brain Canada, ALS Canada was at The Montreal Neurological Institute and Hospital – The Neuro, to announce the final recipients of their 2015 grant competition. Four researchers and clinicians at The Neuro were among those recipients for their groundbreaking work in the ALS research field.

A total of nine competitive calls were put out for grants ranging from $75,000 to $2.9 million, the portfolio of projects were selected through a highly competitive process, reviewed by national and international panels of ALS research experts, with the applications judged for work that would significantly move the field of ALS research forward. In total the 34 projects being funded through the announcements in one year represent 56 investigators at 15 universities in seven provinces.

The Neuro researchers to receive both the Discovery and Bridge Grants for their research projects are:

•             Exploring how loss of a protein complex called nBAF, which regulates expression of neuronal genes, might cause an important part of motor neurons called dendrites to retract and disconnect, and finding ways to overcome this process for treating the disease - $100,000 as a 2014 Discovery Grant to initially explore the project and $100,000 as a 2015 Bridge Grant to maintain momentum of the work done to date

•             Bringing specific, and new expertise into the field of ALS to understand the connection between an important ALS protein, C9ORF72, and a vital mechanism in cells called endosomal membrane trafficking – $100,000 as a 2015 Bridge Grant and $100,000 as a 2015 Discovery Grant (to study complementary aspects of this project)

Of the $15 million invested, the largest allocation is the 2015 $10.15 million Arthur J. Hudson Translational Team Grants (Hudson Grant), awarded to five pan Canadian teams of researchers, two of which count Neuro researchers amongst their members:

·         Research on how stress granules form abnormally in ALS patients that impact their motor neurons and understanding how this may help to slow disease progression - $1.69 million

“The Neuro is a world-leading destination for brain research and advanced patient care. It is home to both an outstanding multi-disciplinary ALS clinic and a world class research team who, following The Neuro’s unique integration model, work hand in hand to better the lives of patients touched by the disease,” said Dr. Guy Rouleau, Director, Montreal Neurological Institute and Hospital. “We applaud ALS Canada and Brain Canada’s commitment to research, the grants being announced today will help us all work together to accelerate the search for better treatments for our patients and bring us closer to our end goal to find a cure for ALS.”

“We are committed to funding the most promising research through the ALS Canada Research Program, to make ALS a treatable disease,” said Tammy Moore, CEO of the ALS Society of Canada. “Never before have we had the financial resources to be able to fund multi-collaborative research projects across leading academic institutions to the extent we can today, it is because of the generosity of Canadians who embraced the ALS Ice Bucket Challenge and the investment from the federal government’s Canada Brain Research Fund through Brain Canada. This important research brings hope to the 3000 Canadians living with ALS today, and the people who will be diagnosed in the future.”

"Being given a diagnosis of ALS was devastating to myself and my family," said Carol Skinner, an advocate who was diagnosed with ALS in 2013 at the age of 41.  "I felt frightened and alone.  But seeing the tidal wave of support from our community through the Ice Bucket Challenge, and the potential of significant discoveries from the outcomes of the research projects announced today, inspires me to have faith that ALS will become a treatable, instead of terminal illness."

Along with the funds allocated to research, an additional $4.4 million raised by the 2014 Ice Bucket Challenge was invested to support the day-to-day care of Canadians living with ALS. Approximately 2,500 to 3,000 Canadians are living with ALS today, and the average cost for caring for one person with ALS is between $150,000 and $250,000.

For more information regarding the investments for ALS research or to donate, please visit www.als.ca.

The Montreal Neurological Institute and Hospital – The Neuro---is a world-leading destination for brain research and advanced patient care. Since its founding in 1934 by renowned neurosurgeon Dr. Wilder Penfield, The Neuro has grown to be the largest specialized neuroscience research and clinical center in Canada, and one of the largest in the world. The seamless integration of research, patient care, and training of the world’s top minds make The Neuro uniquely positioned to have a significant impact on the understanding and treatment of nervous system disorders. The Montreal Neurological Institute is a McGill University research and teaching institute. The Montreal Neurological Hospital is part of the Neuroscience Mission of the McGill University Health Centre. For more information, please visit www.theneuro.ca