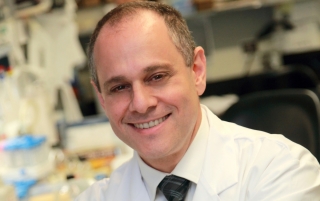 For many years, the Montreal Neurological Institute and Hospital (The Neuro) and the Research Institute of the McGill University Health Centre have conducted studies that have led to a greater understanding of the nature of Parkinson’s disease (PD). About 100,000 Canadians have PD, a motor neuron disease generally associated with old age, but which can also appear in a person’s thirties or forties. Characteristic symptoms include tremor, rigidity and gait dysfunction as well as mood and sleep disorders, and cognitive degeneration.

Below, a brief summary of The Neuro’s recent PD-related stories along with descriptions of PD researchers:

An international task force of researchers working under the umbrella of the International Parkinson and Movement Disorder Society has proposed new criteria for determining the onset of PD. The task force used the latest data and research knowledge from around the world to arrive at what they consider to be the most comprehensive diagnostic criteria for PD.  The criteria will serve as a benchmark for a systematic approach to PD diagnosis.

Until now, no objective test for PD was available, and a diagnosis could be undertaken only by a specialist in movement disorders who carried out a neurological examination and analyzed the patient’s medical history.

“The new criteria will enable a wider range of non-PD-specialized clinicians to provide patients with an accurate diagnosis,” says Dr. Ron Postuma, co-Chair of the MDS task force, who is also a researcher in neurosciences at the Research Institute of the McGill University Health Centre and at The Neuro, and associate professor in the Department of Neurology and Neurosurgery at McGill University..

The results of the task force’s study were published in the journal, Movement Disorders.

A team at The Neuro has made a generic “map” that shows how PD progresses within the brain. The study used MRI scans and clinical data obtained from 230 people in the early stages of PD and compared them with information from healthy individuals of the same age. The comparison indicated the brain regions that showed early-stage atrophy. Past studies were inconclusive because they drew on patient populations that were too small, according to Dr. Alain Dagher, a neurologist at The Neuro who was senior author of the study published in eLIFE Journal.

“The atrophy pattern is compatible with a disease process that spreads via brain networks. This process had never been shown in human patients before,” said Dr. Dagher. “This would support the hypothesis that PD is caused by a ‘toxic agent’ that spreads from brain cell to brain cell.”

The toxic agent might be a protein that can travel through neuronal pathways, making copies of itself and infecting neighbouring cells. Understanding this process could lead to new drugs that would target the culprit protein, either to slow its progression or to stop it entirely.

The Neuro’s study used scans and data freely available from the Parkinson’s Progression Markers Initiative (PPMI). This initiative is conducted by a worldwide network of clinical sites to identify markers for PD progression. See www.ppmi-info.org

The PD patients in The Neuro study will continue to be monitored annually to see how and where PD develops.

Facilitating collaborations among researchers, clinicians and patients is one of the goals of the latest director of the Quebec Parkinson Network, Dr. Edward Fon, a leading clinician-researcher at The Neuro.  He widely supports the notion of data sharing and “open science.” Consequently, he is urging patients and their caregivers to participate actively in the research process. In this way, they will be more aware of the latest research and gain a better understanding of PD and its treatment.

The Quebec Parkinson Network brings together researchers, clinicians and patients involved in PD. It also compiles separate data bases on patients on clinical-neuroimaging-neuropsychological-sleep information, and on a biobank.

The Neuro and the Research Institute of the MUHC

Throughout the years, The Neuro and the Research Institute of the MUHC have developed an expertise on Parkinson’s Disease. Currently, there are around 15 researchers from basic science to epidemiology who are working on various aspects of the disease, such as neuronal degeneration, genetics, and quality-of-life-limiting aspects like mood disorders, lack of motivation and cognitive problems. Others work on the detection and treatment of non-motor symptoms or deep brain stimulation to relieve tremors and rigidity. Every year, approximately 900 patients are seen at the Movement Disorders Clinic that operates at two MUHC sites, the Montreal General Hospital and The Neuro.

The Neuro in new partnership with China

A high-profile Chinese delegation visited The Neuro last February following the signing of a training partnership between The Neuro and Shenzhen Second People’s Hospital. The focus of the new agreement is on movement disorders such as Parkinson’s disease, and on epilepsy. Dr. Bernard Brais and Dr. Alan Evans conducted a tour of The Neuro for delegates who included Ms. Yi Huan Wu, Deputy Mayor of Shenzhen Municipal Government, Ms. Jie Xie, Director of Shenzhen Municipal Foreign Affairs and Administration Office and Mr. Liang Cai, Consul and Ms. Xiao Yin Shi, Vice-Consul General from the Consulate General of the People’s Republic of China in Montreal.

Parkinson’s experts at The Neuro:

Dr. Anne-Louise Lafontaine, a neurologist, is director of The Neuro's interdisciplinary Movement Disorders Clinic.  She was instrumental in developing a rapid-access clinic that brings Parkinson's disease patients in contact with nurses and physicians with minimal delay.  She also conducts clinical research trials for Parkinson’s disease.

Dr. Lesley Fellows is a neurologist whose research uses cognitive neuroscience techniques to study complex human behaviour.  Her research is revealing the effects of Parkinson’s disease on behaviour, learning, and attention span.  This research seeks to determine where behavioural changes are a result of disease or medication. She and her colleagues at the Parkinson's clinic are determining how to assess mood, motivation and cognition in order to target damaging quality-of-life aspects of Parkinson’s disease. In March, 2016, Dr. Fellows was appointed to the new position of Assistant Dean of Academic Affairs, Faculty of Medicine, McGill University.

Dr. Alain Dagher is a neurologist who uses functional brain imaging techniques to understand how Parkinson’s disease affects thinking and emotion.  This research could have wide-ranging implications for understanding and treating cognitive and mood problems in Parkinson's patients.

Dr. Louis Collins is a brain-imaging specialist who uses non-invasive image-processing methods to identify brain structures.  The data from the use of his methods have become essential when planning and undertaking image-guided surgical treatments for Parkinson's disease. Thanks to this data, surgeons can better place deep brain electrodes that stimulate specific areas of the brain and stop symptoms in Parkinson's disease.

Dr. Abbas Sadikot is a neurosurgeon who specializes in the surgical implantation of Deep Brain Stimulators (DBS) in patients with Parkinson’s disease.  By inserting a small device into a patient’s brain, electrical pulses are sent that act to relieve tremors and rigidity caused by Parkinson’s disease.