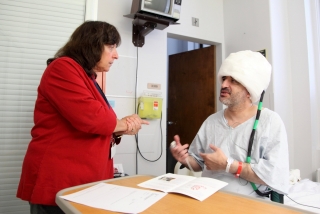 Surgery is the only way to stop seizures in 30 per cent of patients with focal drug-resistant epilepsy. A new study finds that inducing seizures before surgery may be a convenient and cost-effective way to determine the brain region where seizures are coming from.

Epilepsy patients awaiting surgery often stay in hospital for one to two weeks under medical observation for the recording of seizures. By recording the source of the seizure, doctors can know what part of the brain to operate on to stop future seizures. This stay can be extremely inconvenient for patients and expensive for health care systems.

In approximately 20 per cent of patients, electrodes have to be inserted directly into the brain. Patients with inserted electrodes often undergo cortical stimulation, a procedure that applies electrical current to the brain to map brain function but also to induce seizures for better understanding of the epileptic network. So far, no study systematically addressed whether relying on induced seizures to plan the surgery is as effective as relying on spontaneous seizures.

Looking at data from 103 epilepsy patients in Montreal, Canada and Grenoble, France, a research team led by Dr. Birgit Frauscher at The Neuro (Montreal Neurological Institute and Hospital) used statistical methods to reveal correlations between the presence of stimulated seizures and their onset zone and patient outcome. They found the patients who had induced seizures had better outcomes than patients in whom no seizures could be induced. Also, there was strong similarity between the seizure onset zones identified by induced and spontaneous seizures.

This finding suggests that inducing seizures is as effective for determining the origin of seizures in the brain as spontaneous seizures. Using induced seizures in this way could mean much shorter hospital stays for patients awaiting surgery, and cost savings for hospitals that perform these operations.

Dr. Frauscher says her clinic has changed its standard practice, performing stimulation early after electrode insertion, and expects other clinics will follow as a result of this study.

“I think it would be a huge advantage if this procedure was done in the first days of a patient’s stay,” says Dr. Frauscher. “It’s not a new procedure, but the approach is new in the sense that now we know it’s very similar to a spontaneous seizure, so we can reduce hospital time. Instead of being in hospital for two weeks, patients can maybe be there for 48 or 72 hours and we only need to record maybe one additional spontaneous seizures and not several, and that is a huge difference.”

The Neuro – The Montreal Neurological Institute and Hospital – is a world-leading destination for brain research and advanced patient care. Since its founding in 1934 by renowned neurosurgeon Dr. Wilder Penfield, The Neuro has grown to be the largest specialized neuroscience research and clinical center in Canada, and one of the largest in the world. The seamless integration of research, patient care, and training of the world’s top minds make The Neuro uniquely positioned to have a significant impact on the understanding and treatment of nervous system disorders. In 2016, The Neuro became the first institute in the world to fully embrace the Open Science philosophy, creating the Tanenbaum Open Science Institute. The Montreal Neurological Institute is a McGill University research and teaching institute. The Montreal Neurological Hospital is part of the Neuroscience Mission of the McGill University Health Centre. For more information, please visit www.theneuro.ca