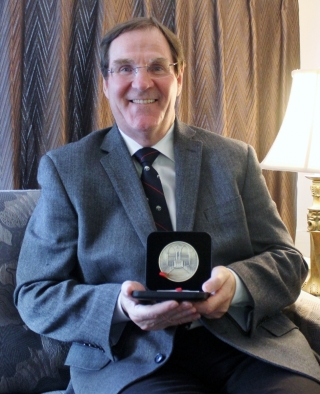 Senate of Canada recognizes outstanding contributions to the community

The Senate of Canada has awarded Alan Evans a Canada 150 medal for his commitment to advancements in Alzheimer’s disease and palliative care research. He was nominated by Senator Judith Seidman, a former research fellow at the Montreal Neurological Institute and Hospital, and Associate Professor of the McGill School of Social Work.

Alan Evans is a James McGill Professor of Neurology and Neurosurgery, Psychiatry and Biomedical Engineering, and the Scientific Director of the Ludmer Centre for Neuroinformatics & Mental Health. He is also the Scientific Director of Healthy Brains for Healthy Lives (HBHL), a high profile, high priority multidisciplinary and cross-sectoral initiative in neuroscience at McGill, made possible with support from the Canada First Research Excellence Fund (CFREF).

“I’m absolutely flattered to have won the Senate of Canada 150 medal,” said Dr Evans. “I am delighted that the field I’m working in has been recognized in that way. Alzheimer’s disease is such a terrible scourge and it is important that Canada puts research resources into this field so our older population are better protected against the disease.”

Evans is one of three McGill professors to receive the Canada 150 medal, the others being Andrea C. LeBlanc of the Lady Davis Institute, and Bernard J. Lapointe, Director of Palliative Care McGill.

The Senate of Canada 150 medal was created to celebrate the 150th anniversary of the first sitting of the Canadian Senate on Nov. 6, 1867, the year of confederation. Created to commemorate this occasion and to give Honourable Senators the opportunity to recognize Canada’s unsung heroes, awardees are deeply involved in the betterment of their communities through generosity, dedication, volunteerism, and hard work. The bronze medal, struck at the Canadian Mint, features the Senate’s emblem on one side and the Senate Chamber, along with the recipient’s name, on the other.