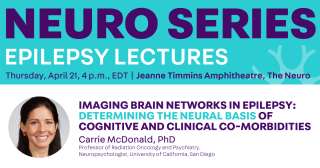 The Centre of Excellence in Epilepsy at The Neuro (Montreal Neurological Institute-Hospital) is proud to announce the new Epilepsy Lecture Series. The series will include eight lectures per year covering hot topics in basic and clinical epilepsy research. Topics will be presented by distinguished leaders and rising stars in the field, with the goal of bridging basic and clinical perspectives.

Link to livestreaming here (Q&A function is not accessible)

Neuropsychologist at the University of California, San Diego

Talk Abstract - Over the past decade, the conceptualization of epilepsy as a network disorder has revolutionized our approach to the study of seizures, as well as psychiatric and cognitive co-morbidities in epilepsy. Brain imaging has been at the forefront of this movement, shifting the focus from one of identifying epileptic lesions to one defining epileptogenic networks. In parallel, the study of cognitive impairments in epilepsy has shifted from the study of isolated cognitive impairments within epilepsy syndromes (e.g., memory impairments in temporal lobe epilepsy; TLE) to one that emphasizes cognitive and psychiatric profiles within and across epilepsy syndromes—or cognitive phenotyping. In this talk, Dr. McDonald will describe a 15- year NIH-funded program of research using advanced, quantitative structural, functional, and diffusion imaging to characterize the neural substrates underlying cognitive co-morbidities in patients with epilepsy. Her talk will highlight network abnormalities associated with cognitive phenotypes in TLE and describe how these patterns may be useful for identifying patients at risk for progressive cognitive decline. She will also describe network features that predict individualized risk for cognitive decline following epilepsy surgery, as well as possible mechanisms of cognitive reserve. Finally, Dr. McDonald will review the need to consider how patient-specific risk and resilience factors, including bilingualism, can influence brain and neuropsychological profiles and could modify risk for post-operative cognitive decline. Future efforts discussed will include the need to harmonize neuropsychological approaches to cognitive phenotyping for deployment in large-scale, international studies. Such global efforts are essential to determine the reproducibility and generalizability of the current findings, accelerate scientific discoveries, and advance personalized medicine in epilepsy. 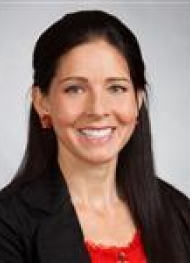 Dr. Carrie McDonald is a Professor of Radiation Oncology and Psychiatry and a board-certified neuropsychologist at the University of California, San Diego. Her research and clinical interests include how multimodal imaging and neuropsychological data can be used to predict cognitive and psychiatric outcomes following different neurosurgical interventions. She also serves as Co-Chair of ENIGMA-Epilepsy and is an active member of the Neuropsychology, Seizure Networks, and Big Data task forces of the ILAE.
Last updated: 04/05/2022 - 12:42