To attend in person, register here

Abstract: Since the introduction of permanently implantable deep brain stimulation (DBS) systems in the 1980s, hundreds of thousands of patients throughout the world have undergone DBS surgery. In the beginning the majority were patients with Parkinson’s disease or tremor undergoing DBS of the thalamus, but DBS is currently applied in many different diseases. Also, the preferred brain target for many indications evolved over the years due to improved brain imaging techniques. During my medicine study, PhD and neurosurgical residency I became fascinated by basal ganglia functioning and DBS. My research interests focus on improving the outcome of DBS surgery in established indications and the application of experimental DBS in new indications. In the Killam Seminar, I will overview several DBS developments in the field of obsessive-compulsive disorder, Parkinson’s disease, and disorders of consciousness & arousal.

Bio: Pepijn van den Munckhof (born in 1973 in Nijmegen, the Netherlands) studied Medicine at the University of Groningen from 1991-1999. In 1996-1997, he spent a research year with Leo Verhagen Metman and Thomas Chase at the Experimental Therapeutics Branch of the National Institute of Neurological Diseases and Stroke (NIH, Bethesda, USA), studying levodopa response fluctuations in Parkinson’s disease. From 1999-2002, he went to Montreal for a Master’s in Molecular Biology at the Université de Montréal. During these years, he studied basal ganglia development in the naturally occurring aphakia mouse model of Parkinson’s disease in the Molecular Genetics Research Unit of Jacques Drouin at the Instituts de Recherches Cliniques de Montréal and in the Cone Laboratory of Abbas Sadikot at the Montreal Neurological Institute. After returning to the Netherlands for his training in Neurosurgery at the Academic Medical Center in Amsterdam, he continued studying the aphakia mouse model in both the Cone Laboratory and the department of Anatomy and Neurosciences of Henk Groenewegen and Pieter Voorn at the Free University of Amsterdam. He obtained his PhD at the University of Amsterdam in 2011. During neurosurgical training, he was trained in deep brain stimulation (DBS) by Andries Bosch and Rick Schuurman. His research interests focus on improving the outcome of DBS surgery in established indications (such as Parkinson's disease and essential tremor) and the application of experimental DBS in new indications. Since 2009, he acted as a co-investigator on clinical trials studying subthalamic nucleus versus globus pallidus DBS in Parkinson's disease, nucleus accumbens DBS in obsessive-compulsive disorder, internal capsule DBS in depression and anorexia nervosa, and general anesthesia versus local anesthesia in DBS for Parkinson's disease. He initiated several research projects to improve the radiological and neurophysiological targeting of DBS surgery. Since 2017, he acts as principal investigator of a clinical trial studying the effects of DBS of the central thalamus in patients with disorders of consciousness, for which he created a multidisciplinary national research alliance. 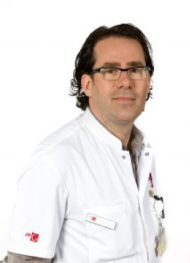