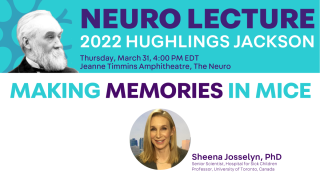 Established in 1935, the Hughlings Jackson Lecture is The Neuro’s premier scientific lecture. It honors the legacy of British neurologist John Hughlings Jackson (1835-1911) who pioneered the development of neurology as a medical specialty.

Abstract: Understanding how the brain uses information is a fundamental goal of neuroscience. Several human disorders (ranging from autism spectrum disorder to PTSD to Alzheimer’s disease) may stem from disrupted information processing. Therefore, this basic knowledge is not only critical for understanding normal brain function but also vital for the development of new treatment strategies for these disorders. The memory may be defined as the retention over time of internal representations gained through experience, and the capacity to reconstruct these representations at later times. Long-lasting physical brain changes (‘engrams’) are thought to encode these internal representations. The concept of a physical memory trace likely originated in ancient Greece, although it wasn’t until 1904 that Richard Semon first coined the term ‘engram’. Despite its long history, finding a specific engram has been challenging, likely because an engram is encoded at multiple levels (epigenetic, synaptic, cell assembly). My lab is interested in understanding how specific neurons are recruited or allocated to an engram, and how neuronal membership in an engram may change over time or with a new experience. Here I will describe both older and new unpublished data in our efforts to understand memories in mice.

For those attending virtually, you may send in your  questions for the speaker here

Bio: Sheena Josselyn is a Senior Scientist at The Hospital for Sick Children (SickKids) and a Professor in the departments of Psychology and Physiology at the University of Toronto in Canada. She holds a Canada Research Chair in Brain Mechanisms underlying Memory and is a Fellow of the Royal Society of Canada. Her undergraduate degrees and a Master's degree in Clinical Psychology were granted by Queen’s University in Kingston (Canada) where she worked in Dr. Richard Beninger’s lab. Sheena received a Ph.D. in Neuroscience/Psychology from the University of Toronto with Dr. Franco Vaccarino. She conducted post-doctoral work with Dr. Mike Davis (Yale University) and Dr. Alcino Silva (UCLA) before returning to Toronto. Dr. Josselyn is interested in understanding how the brain encodes, stores and uses information. Several human disorders (ranging from autism spectrum disorder to Alzheimer’s disease) may stem from disrupted information processing. Therefore, this basic knowledge is not only critical for understanding normal brain function but also vital for the development of new treatment strategies for these disorders. 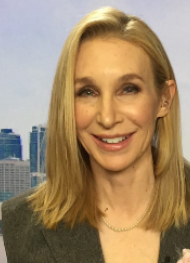