Abstract: One uniquely human experience is our ability to communicate via speech and language. Specialized laryngeal motor control has been suggested to be a critical evolutionary adaptation in the human brain that enabled speech. During my PhD, I investigated the cortical specialization underlying laryngeal motor control using functional neuroimaging and comparative neuroanatomy. We localized the cortical representation of the larynx in humans during voicing using fMRI and studied how the functional activation patterns relate to individual sulcal morphology. In order to study critical brain specializations in a comparative framework across primate species, we use a 'common space' approach that can account for both shared and distinct features across species. We developed a surface-based cross-species registration that allows us to study how cortical reorganization during evolution affected the relative location of brain areas and connectivity profiles. Using the 'common space' approach, we can test the effect of different evolutionary scenarios on the brain architecture related to laryngeal motor control.

Bio: Nicole just completed her PhD in Neuroscience at the Wellcome Centre for Integrative Neuroscience (WIN), University of Oxford, UK. She was working with Dr. Kate Watkins (Speech and Brain Lab) and Dr. Rogier Mars (Neuroecology & Anatomy Lab). For her Master's degree, Nicole studied at the Graduate School of Neural & Behavioural Sciences in Tübingen, Germany, and at the Max Planck Institute for Psycholinguistics in Nijmegen, The Netherlands. Nicole has previously visited the MNI to study sulcal morphology in in the subcentral region with Dr. Petrides and she is now returning to the MNI for a Postdoctoral position in the lab of Dr. Bernhardt. 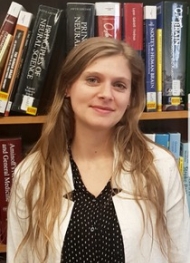 Related Links:
Registration
All recordings in the Feindel Virtual Brian and Mind Seminar at The Neuro
Last updated: 03/30/2021 - 11:14