Abstract:  Human cerebellar cortex, with ~ 80% of the surface area of the cerebral cortex, is anatomically linked with multiple sensory, motor, association, and paralimbic cerebral cortical regions. The majority of fibers that exit cerebellar cortex synapse in dentate nuclei (DN) before reaching extracerebellar structures such as cerebral cortex, but the functional neuroanatomy of human DN remains largely unmapped. I will address three main questions in this presentation: 1) Why is mapping the intrinsic functional architecture of the DN, as elucidated by resting state networks, clinically relevant? 2) How can recent technological advances in neuroimaging research (e.g., big magnets, multichannel array coils and simultaneous multislice-imaging) potentiate the pace of discovery by mapping previously underexplored regions of the cerebellum? 3) What are the future directions, which can unmask new predictions for basic human functional neuroanatomy and eventually help us build better tools (e.g., non-invasive cerebellar stimulation) to serve our patients better? In addition to reviewing the foundational aspects of the neuropsychiatry of the cerebellum, I will present results from our recent work investigating cerebellar function and dysfunction in autism spectrum disorder, major depressive disorder, anxiety disorders and psychosis.

Bio: Sheeba received her Bachelor’s degree from Cochin University of Science Technology, Master’s degree from New Jersey Institute of Technology, and Doctoral degree from Stony Brook University, all in Biomedical Engineering. Prior to the current appointments, she was a Principal Research Scientist at the Northeastern University Biomedical Imaging Center. She currently holds Research Affiliate positions at the Department of Psychiatry at Massachusetts General Hospital, and at the Department of Brain and Cognitive Sciences at Massachusetts Institute of Technology. As a biomedical researcher by training, she is passionate about translational neuroimaging and her goal is to apply optimized MRI acquisition methods and data analysis pipelines for the development of personalized medicine. 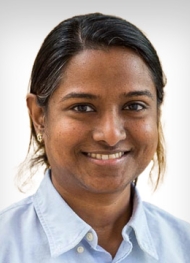