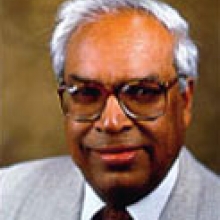 Comparative studies of work attitudes, work motivation and alienation, and leadership are among Dr. Kanungo's key areas of expertise. His current research projects include cross-national studies on work motivation and alienation and on the application of leadership research to India and Sri Lanka. He has authored, co-authored or contributed to over 100 refereed publications, including the books Biculturalism and Management (1980), South Asians in the Canadian Mosaic (1984, Ed.), Work Alienation (1982), Charismatic Leadership (1988, J.A. Conger, Eds.), Management in Developing Countries (1990, with McGill's A. Jaeger, Eds.), Work Motivation (1994, with McGill's M. Mendonça, Eds.), Employee Management in Developing Countries (1995, with McGill's D. Saunders, Eds.) and Ethical Dimensions of Leadership (1996 with M. Mendonça), Compensation: Effective Reward Management(1997, M. Mendonça). A distinguished researcher in his field, Dr. Kanungo is frequently cited by other academics and professionals and is the recipient of numerous awards from research granting agencies, including the NRC, Canada Council, and SSHRC. In 1988, Dr. Kanungo was awarded the Faculty of Management Chair in Organizational Behavior in recognition of his prolific research.

Dr. Kanungo's affiliations with the business community include consulting for J. Walter Thompson Co. Ltd., Clarion Advertising Services, Canadian Broadcasting Corporation and Xerox Canada. He also serves as editorial consultant for several prestigious academic journals in Canada, the US and the UK. The author of a number of popular articles, he has appeared on television and radio programs for popularizing scientific work in psychology and management.