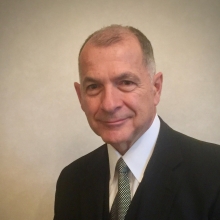 Pat Minicucci has dedicated his entire working life and career to the financial services sector. He has more than 33 years of experience in the banking field spanning across Canada, the Caribbean & parts of Central America. He has held a variety of senior executive positions with major Canadian Banks.

Since his retirement from banking in 2013, Pat decided to do make a difference by starting his own consultancy and coaching business. He started Minicucci Coaching & Consulting, where he is sole owner and CEO, providing executive coaching and advisory services to senior executives, emerging leaders, and businesses.

Prior to his coaching & consulting practice, he was the Senior Vice President & Regional Head for Personal & Commercial Banking for the Central, Western & Atlantic regions for National Bank of Canada from August 2010 to October 2012 where he was responsible for the entire branch network and commercial and corporate banking outside the province of Quebec. Prior to that, from 1997-2010, Pat was with Scotiabank and his responsibilities included Senior Vice-President-International Banking for the Caribbean & Central America, Senior Vice-President– Greater Toronto Region, Personal and Small and Medium sized enterprises Banking, Senior Vice President & Regional Head, Quebec & Eastern Ontario, and Vice President, Toronto East.

He had worked at National Bank of Canada from 1991 to 1997 as Vice-President–Continuous Improvement Program and Vice-President–Commercial Banking & Retail Banking, Montreal Centre. Pat had begun his career in banking while a student at McGill University with Royal Bank of Canada and upon graduation joined RBC in their management training program, where upon completion he assumed different managerial positions over a
7 year period.

Pat is a graduate of McGill University where he obtained his Bachelor of Commerce degree with a major in Marketing. He is a Fellow of the Institute of the Canadian Bankers Association, and a graduate of the Advanced Management Program (AMP) from Harvard Business School, Harvard University. He is also a graduate of the Director’s Education Program from the Rotman School of Business, University of Toronto and the Institute of Corporate Directors, having been awarded the ICD.d designation. In 2014, Pat completed the core curriculum of the Coaches Training Institute and is now a Co-Active Coach.

He has served on the board of directors of both publicly traded and privately held companies including National Bank Securities, Scotiabank Trinidad & Tobago Ltd., Scotiabank Bahamas Ltd, The Bank of Nova Scotia Jamaica Ltd., and Maduro & Curiel’s Bank, NV, Dutch Antilles. He is also a current trustee and member of the executive committee of the CCAA (Caribbean & Central American Action) based in Washington DC. In December 2008, the CCAA conferred the Golden Star of the Caribbean to Pat for his contribution to the CCAA and to the Caribbean & Central American basin.

He has been actively involved in the community for a number of organizations including the United Way of Greater Montreal where he was Treasurer and member of the executive committee and the board, member of board of the Saidye Bronfman Centre of the Arts and the Juvenile Diabetes Foundation, member of the Board of Governors of Junior Achievement of Central Ontario, past President & Chair of the Canadian Italian Business Association of Montreal, past President & Chair of the National Federation of Canadian Italian Business and Professional Association and past Chair of the Major Gifts Committee of the York Central Hospital Foundation. He is a past member of the board of directors of the Providence Healthcare Foundation and since 2016 continues to be part of Providence’s Strategic Planning Committee.

In June of 2012, Pat was awarded Queen Elizabeth’s Diamond Jubilee Medal for his service to the communities of Greater Montreal and Greater Toronto over the years.

Pat is married to his high school sweet heart, Maria for more than 36 years and have two children, Stephanie and Daniel and are the proud grandparents of Sebastian and Sarah. He is fluent in English, French and Italian, and speaks some Spanish. He is a big fan of ice hockey, enjoys golf, fitness training, and Formula One Racing.