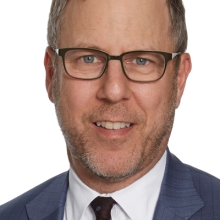 Mitchell Scherzer is a senior vice president and chief financial officer of Hearst. He is also a member of the Hearst Board of Directors, and is a testamentary trustee under the will of William Randolph Hearst. Scherzer is a former investment banker who has concentrated most of his 20-plus-year banking career in the communications, media and entertainment industries.

Scherzer began his career at Goldman Sachs in 1989, ultimately serving as co-head of its media group. While at Goldman Sachs, he gained experience on a range of corporate finance and M&A transactions across a variety of sectors in the media and communications industries.

Scherzer joined JP Morgan as a managing director in 2002. He went on to head U.S. Media Investment Banking, where he led JP Morgan’s investment banking initiatives in the media industry. Scherzer was a strategic advisor to industry leaders in publishing, broadcasting, cable, television, satellite, financial information and telecommunications.

Scherzer completed his undergraduate studies at McGill University and obtained an MBA from The Wharton School.