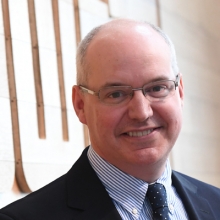 Marc Macdonald joined Montreal headquartered Lowe’s Canada (NYSE: LOW) in February 2017, to help lead the integration of RONA Inc. as Senior Vice-President, Human Resources. In that capacity, he leads the Lowe’s Canada teams responsible for talent management and acquisition, organizational transformation, labour relations, health and safety and total compensation, in addition to the corporate, distribution centers and store HR business partners. He currently reports in directly to the Lowe’s Canada President, and on a matrix basis to the Lowe’s Chief HR Officer, based in the greater Charlotte, North Carolina, area.

Mr. Macdonald has extensive talent management, labour relations and organizational development experience. Prior to joining Lowe’s Canada, he was Chief Human Resources Officer at Montreal headquartered DAVIDsTEA (Nasdaq: DTEA) from July 2014 to January 2017. He had previously served as Vice-President, Human Resources for Keurig Green Mountain (2011-2014) for its Canadian, United Kingdom and Asia-Pacific business units and was co-based in their Burlington, VT, Boston, MA and Montreal, QC offices. Earlier in his career, he relocated to Toronto, ON as Director, Human Resources for The Home Depot Canada (2008-2011). From 1998 to 2008, he held positions with increasing responsibilities at Resolute Forest Products (TSX: RFP), including that of Senior Director, Human Resources for its paper manufacturing facilities in Alabama, Georgia, Mississippi, Texas and across Canada.

Mr. Macdonald is fluently bilingual (English and French) holds a Bachelor’s degree in Commerce from McGill University (1993-94) and a Masters in Human Resources Management from HEC Montreal. He is a Certified Human Resources Professional (CHRP) and a LeanSixSigma Green Belt.

Active father of two teenage children, Mr. Macdonald is a citizen of both Canada and France. He sits on the Human Resources committee of speciality food retailer Chocolats Favoris’ board of directors. He is also an active volunteer and most recently as a member of the board of directors of St. George’s School of Montreal.