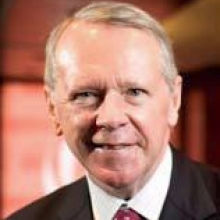 Mr. Thoman, a McGill graduate (BA ’66, Honours) is managing partner of Corporate Perspectives, a corporate strategy advisory and private investment firm. He is also an adjunct Professor at Columbia University’s School of International and Public Affairs, and a visiting Professor of the Fletcher School of Law and Diplomacy, Tufts University. He is unique in being a “top five” executive in four “Fortune 75” companies in three industries. He served as CEO of Xerox Corporation and in senior positions at IBM, Nabisco International and American Express. He also worked at Evercore Partners, McKinsey and Company, CitiBank, and Exxon Mr. Thoman serves on a number of corporate and not‐for‐profit boards including Schneider Electric, US Insead Advisory Board, the Americas Society, the Council of the Americas, the Fletcher School of Law and Diplomacy, and the French American Foundation. He is also a member of the Trilateral Commission, and the Council on Foreign Relations, where he serves on the Nominating and Governance Committee. He has also served on the Boards of DaimlerChrysler, the Chrysler Company,Xerox Corporation, Fuji‐Xerox and the Banker Trust Corporation. He was awarded a Legion of Honour by the French government.