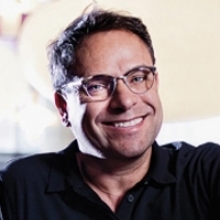 Bertrand Cesvet is chairman and senior partner at commercial creativity firm Sid Lee. A trained economist, Bertrand earned an MBA from McGill University in 1990. Shortly after, he joined Mercer Management Consulting as a strategic consultant where he worked on introducing relationship-marketing strategies to Canada, the U.S. and Europe. With Sid Lee for the past 14 years, Bertrand’s extensive experience and expertise in strategic and creative marketing has benefited such top-tier brands as adidas, Red Bull, Cirque du Soleil, Dom Perignon, Carlsberg Brewery, Volkswagen and Dell.

In addition to overseeing Sid Lee’s international operations, Bertrand serves as the head strategist for the agency’s impressive portfolio of clients. He has played a key role in the agency acquiring world-class mandates and has been fundamental in forging a strong and lasting relationship between Sid Lee and Cirque du Soleil. Passionate about making Sid Lee shine on the international stage, Bertrand has overseen the openings of four new ateliers over the past few years, in Amsterdam, Paris, Toronto and Austin.

With Bertrand at the helm, Sid Lee has grown from a small shop of 10 employees in Montreal to an international powerhouse known the world over for its creativity, originality and unique business model. The agency has won a host of awards and accolades over the years, from Cannes Lions and One Show awards to Grafika and Créa prizes. Marketing Magazine named Sid Lee Agency of the Year three in a row (2009-2011), and in 2011 Time featured the agency on it's The Top Ten of Everything of 2011 shortlist for an adidas TV spot, from the brand’s iconic all in campaign.

A pioneer in his field, Bertrand is frequently invited to speak at conferences and events on the topics of management, creativity, and the future of marketing and communications. He also sits on the board of directors for the ONE DROP Foundation, an initiative of Cirque du Soleil founder Guy Laliberté dedicated to ensuring everyone on the planet has access to clean water.

In 2009, Bertrand wrote the best-selling business book Conversation Capital: How to Create Stuff People Love to Talk About, which sold more than 20,000 copies worldwide. Published by Financial Times Press in 2009, the book outlines Bertrand’s strategic approach that stresses the importance of creating rich consumption experiences to ensure brand success. For him, communication begins with the product, and each interaction with the consumer is a prime opportunity to generate word of mouth. Sid Lee adopted the foundations of this approach and is now a leader in experiential design and communications.