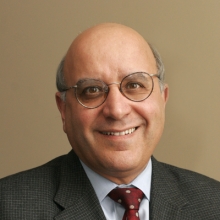 Anthony C. Masi joined McGill’s Department of Sociology, Faculty of Arts in 1979. He has conducted research in Italy and Canada on labour markets and has done extensive field work at steel mills in both countries. He was a member of a team of Canadian and Swedish researchers that designed and implemented special labour force surveys with the national statistical offices of both countries dealing labour-market flexibility. That group also conducted interviews with managers and trade union leaders in the steel, pulp and paper, and telecommunications industries of the two countries. In subsequent work, Prof Masi explored how deindustrialization was occurring in Italy.

Early in his academic career, Prof Masi founded the Faculty of Arts Computer Services and was named McGill’s Vice-Principal (Information Systems and Technologies) in 2000. He became Provost (chief academic officer and chief budget officer) of McGill in 2005. After ten years in that role, he returned to teaching and research in the Desautels Faculty of Management in Fall 2015. He is currently conducting research on changes in the Italian employment patterns and prospects from 1990 to the present using that country’s labour force survey and general social surveys.

Professor Masi was a member of Canada’s National Statistics Council (2005-2017) and sat on the Scientific Advisory Board of the Italian National Research Council (2010-2015). Before assuming his administrative roles, he was the Jemolo Fellow of Italian Studies at Nuffield College, University of Oxford (UK) and visiting professor in Italy at the Universities of Pisa and Bari. From January to June 2016 he was on sabbatical at the University of Rome I (La Sapienza) where he began his research on employment trends at Italy’s National Institute of Statistics. Subsequently, he was appointed Visiting Research Professor at La Sapienza from April to May in both 2018 and 2019.

He is presently designing a MOOC (massively open online course) entitled “Human Population Dynamics” for McGill, under the banner of the edX consortium that is planned be offered during the academic year 2020-2021.

Prof Masi was awarded the Order of Merit of the Republic of Italy (2012) and Canada’s Queen Elizabeth II Diamond Jubilee Medal (2013).

Industrial Relations: Comparison of employment relations in current socio-political and economic context of a variety of nations. Emphasis on historical and recent developments in labour-management relations, labour legislation, institutional structures, collective bargaining, contract coverage, and the role of multi-national corporations.