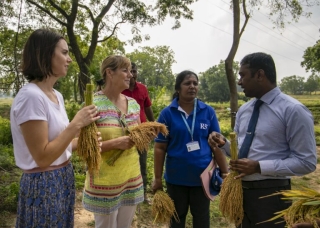 Kate Sinclair is working at the World Food Programme, Sri Lanka while simultaneously finishing her PhD in Human Nutrition at McGill

December 10, was a typical day at the office for Kate Sinclair… Kind of, but not really. Not by a long shot.

It’s not every day that you and your 20,000 colleagues around the world win a Nobel Peace Prize.

In fairness, the Norwegian Nobel Committee actually announced the award on October 9, with the virtual ceremony taking place on December 10. It gave Sinclair, and her 20,000 co-winners, two months to process the good news.

“It was a real surprise to hear the World Food Programme won the Nobel Peace Prize – I was not expecting that,” says Sinclair in an email interview from Sri Lanka, where, on top of working for the WFP, she is completing her PhD in Human Nutrition at McGill. “It is such an honour for all of us working at WFP, including myself. Being awarded this prize is such a humbling moment for us all.”