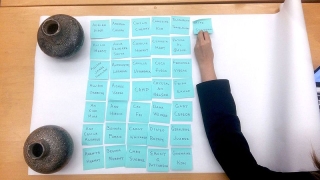 Over 2,500 people at more than 175 events around the world participated in the 2016 Art+Feminism Wikipedia Edit-a-thon, resulting in over 3,500 new and improved articles. A collective campaign to improve the representation of and increasing the participation of women on Wikipedia, the project emerged in the fall of 2013 as a response to the well-known gaps in the online encyclopedia. Siân Evans (Class of 2005), Jacqueline Mabey (Class of 2006) and Michael Mandiberg, the lead co-organizers of the Art+Feminism project, will discuss the origins of the project, its growth (and growing pains), and why the collective writing of history matters. Co- presented by the Institute for Gender, Sexuality and Feminist Studies, Art History & Communication Studies and the McGill Library.

Siân Evans is an art librarian and the co-founder of Art+Feminism, a campaign to improve coverage of women and the arts on Wikipedia. She is actively involved in the library community, publishing on issues around open access, collaborative cataloging, and alternative access to special collections. Her writing can be found in peer reviewed journals such as Art Documentation and The Serials Librarian, and her work with Art+Feminism has been covered by The New York Times, The Wallstreet Journal, ARTnews, and more. Currently, she is the Instruction Librarian at The Decker Library at the Maryland Institute College of Art.

Jacqueline Mabey’s practice as a curator and artwork is shaped both by ten years of post-secondary education in art history and cultural studies at Wilfrid Laurier University, McGill University, and The University of British Columbia, and her multifarious professional experience in curatorial departments, public programs, non-profits, commercial galleries, and artist studios. She works most frequently with art that plumbs the intersections of technology, gender, and sexuality, creating texts and contexts that draw out the complexities and complicities of contemporaneity. Recent, forthcoming, and ongoing projects include: Art+Feminism, a campaign to improve coverage of women and the arts on Wikipedia; Utopia is No Place, Utopia Is Process, a platform for critical feminist pedagogy at Usdan Gallery, Bennington College; “Not Mine Alone, Nor Mine to Own: Some Reflections on the Young Girl” in The Journal of Feminist Scholarship; and “The Only Song About Here Is About Leaving; Or, The Sea Is Lawless,” an essay on the trope of nature in Canadian art. Mabey works independently under the honorific, failed projects. She lives with a small dog next to a large park in Brooklyn

Michael Mandiberg is an interdisciplinary artist, scholar, and educator. His work traces the lines of political and symbolic power online, working on the Internet in order to comment on and or intercede in the real and poetic flows of information. He sold all of his possessions online on Shop Mandiberg, made perfect copies of copies onAfterSherrieLevine.com, created Firefox plugins that highlight the real environmental costs of a global economy onTheRealCosts.com, and transformed all of Wikipedia into books for Print Wikipedia. He is co-author of Digital Foundations and Collaborative Futures, as well as the editor of The Social Media Reader. He founded the New York Arts Practicum, and co-founded the Art+Feminism Wikipedia Editathon. His work has been exhibited at the New Museum, Ars Electronica, ZKM, and Transmediale. A formerSenior Fellow at Eyebeam, he is currently Professor of Media Culture at the College of Staten Island/CUNY and a member of the Doctoral Faculty at the CUNY Graduate Center.

N.B. Please join our speakers at the Sight and Sound Festival at Eastern Bloc on October 1.