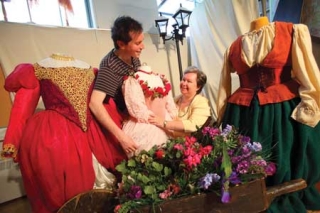 The Three Graces without their swath of fabric would just be nudes. The tiniest bit of gossamer fabric turns them into Greek goddesses. Such is the magic of costume.

Actors often remark that they only actually feel themselves fully embodying their role once they are in costume. For the audience, costumes serve as identifiers. Subtle, or not so subtle, variations in colour, texture, style all work together to signal the audience to visually identify which characters are good or evil, who should fall in love, who should be enemies, and who plays on the same team. In any production of Romeo and Juliet, the Capulets and Montagues will have visual differences that identify their affiliation. Romeo and Juliet will follow their house colours, but will have some small disparity that makes them visually fit together. These “rules” are never articulated to the audience, yet they are absorbed on the same intuitive level as illustrations in a children’s book.

This talk is based on Catherine Bradley’s body of work as a costume designer, including her experiences behind the scenes and in the theatre. She shares insights on topics including what makes a costume effective, how costumes change the audience’s perception, and how the performer is affected by costume. Bradley will bring a few actual costumes for close up examination, and will share production photos to show the transformation of the same costumes onstage in their imagined world.

Catherine Bradley is Resident Costume Designer and Head of Wardrobe at McGill University where she teaches Costuming and History of Costume. She founded the Virtual Textile Project, and the Textile Resource Center, both open access resources. Bradley has designed costumes for a gamut of productions ranging from Aeschylus, Shakespeare, Goldoni, Brecht, to newly developed scripts and collective creations. She began her career working on costumes in many of the major Canadian theatres, including the Stratford Festival, Shaw Festival, National Ballet, National Arts Centre, Banff School of Fine Arts, the Montreal Opera, and Theatre New Brunswick. Bradley remains connected to the industry through freelance millinery, costume confection, and wardrobe management, as well as creating open-access educational materials.