Virtual Event | Play with Language and the Nonsense of Alphabet Books 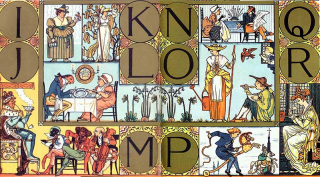 Alphabet books are odd! A flood of these books were published in North America and Great Britain during the nineteenth century, and they continue to be so popular today that we’ve forgotten how odd the form is—and how irrational the rules of reading and writing in English can be.

Join Robin Hoffman for an exploration of the alphabet book as a Victorian publishing phenomenon that helped shape our current understanding of literacy and which audiences read (or look at) which books. We’ll pay particular attention to the illustrated verses of Edward Lear, who truly understood the nonsense of “alphabetical order” and the appeal of alphabet books for adults.

Robin Hoffman's research focuses on Victorian picture books and print culture, exploring how ideas about childhood and literacy intersected with developments in printing technology to shape materials published for both children and adults in nineteenth-century Great Britain. She is currently Editor in the Publishing Department at the Art Institute of Chicago, where she works with curatorial departments to produce exhibitions, catalogues, and didactics about a wide range of subjects and artists, focusing particularly on the holdings of Ryerson and Burnham Libraries. She was previously Assistant Curator and Assistant Head of Publications at the Yale Center for British Art. Her recent publications include “The Dangerous Alphabet and the Dark Side of Victorian Domesticity,” in The Victorian Period in 21st Century Children’s and Adolescent Literature (2018); the introduction to Georgian and Victorian Board Games: The Liman Collection (2017); and “The Means and End(s) of Spelling Reform in the Victorian Press,” in a special issue of Victorian Periodicals Review (Winter 2017). A longtime member of the Children's Literature Association, she has taught university classes on the history of childhood, illustration, and women in literature, among other topics.