Virtual Event | The Many Faces of Norman Bethune 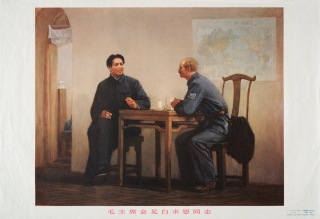 Join Brendan Ross, Mary Hague-Yearl, and Dr. Julian Xue for a discussion of Dr. Norman Bethune and an exploration of how Bethune has been, and continues
to be, portrayed. Bethune was an active member of the Communist Party of Canada, but he was most well-known for his international work in Spain and later in the People’s Republic of China.

Tune in for the discussion and a preview of the Bethune Collections; now digitized in Gale Primary Sources.

Brendan Ross is a third-year medical student at McGill University. His interests include Chinese and Japanese intellectual traditions of medicine and non-Western approaches to medical knowledge. His essay and project for the Molina Foundation Osler Library Medical Student Research award entitled "The Chinese Apotheosis of Dr. Norman Bethune: The Making of a Medical Folk Hero" was written under the supervision of Dr. Rolando Del Maestro, William Feindel Professor Emeritus in Neuro-Oncology at McGill.

Mary Hague-Yearl is the Osler Librarian at the Osler Library of the History of Medicine and an Associate Member of McGill’s Department of Social Studies of Medicine. She studied the history of medicine at Cambridge (M.Phil) and Yale (Ph.D.) before turning to archives and special collections librarianship. Her research interests lie in the interplay between medicine and religion in the pre-modern period, and in the transformation of concepts from humoral medicine into scientific paradigms in the modern period.

Julian is currently the director of Libera Clinic, a new upstart psychiatry clinic in Montreal that is also a McGill experiment for teaching residents outside the hospital. He is a long term McGiller, who completed his BSc. in 2006, his MD/PhD in 2014, and his residency in 2019. His great interest is in the links between Chinese practices of self-cultivation and modern psychotherapy. Parallels in these forms of human flourishing inform both his research and his daily work. As a medical student, he had run the Osler Society, and, like Brendan, won the Osler Essay Award. He is delighted to return to the Library's activities.