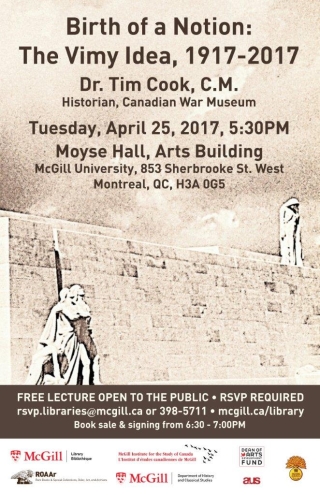 Vimy is more than a battle from the First World War. It is common to hear that Vimy marks the “birth of a nation,” a claim repeated in school textbooks, by politicians, and in the news.  Yet what is meant by this phrase? Do Canadians actually believe that Canada was born at Vimy, 50 years after Confederation? How did the four-day battle of Vimy in April 1917 transform into an origin story?  This was no militarist plot.  While not all Canadians believed in Vimy’s importance, enough did, and the idea of Vimy was invigorated with the building of Walter Allward’s monument on the ridge.  The monument’s unveiling in 1936 by King Edward VIII was attended by more than 6,000 Canadian veterans who crossed the Atlantic.  Since then, Vimy has been incorporated into Canadian history, although its meaning has changed with each generation.  In this year, the 100th anniversary of the battle, Dr. Tim Cook will explore the emergence of the Vimy idea, its changing meaning, and its endurance as a symbol of Canadian service and sacrifice.

Free lecture open to the public.

With special thanks to The Canadian Grenadier Guards

Dr. Tim Cook is a historian at the Canadian War Museum. He was the curator for the museum’s First World War permanent gallery, and he has curated numerous temporary, travelling and digital exhibitions. He has also authored ten books, most of which have been longlisted, shortlisted or awarded prizes, including the C.P. Stacey Prize for Military History (twice), the Ottawa Book Award (twice), the RBC Taylor Prize for Literary Non-Fiction, the BC National Book Award, the J.W. Dafoe Book Prize, the Canadian Authors Association Literary Award and the Shaughnessy Cohen Prize for Political Writing. His newest book is Vimy: Battle and Legend (2017).  In 2012, Dr. Cook was awarded the Queen’s Diamond Jubilee Medal for his contributions to Canadian history and in 2013 he received the Governor General’s History Award for Popular Media: The Pierre Berton Award. Dr. Cook is a Member of the Order of Canada.

Related exhibit | Remembering: Commemorating the One Hundredth Anniversary of the battle of Vimy Ridge