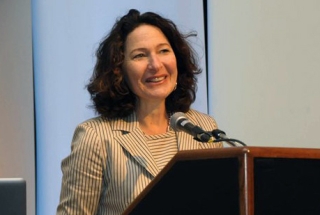 The Friends of the McGill Library present the 2017 F.R. Scott Lecture

It’s Time to Take Our Journalism Back*

The Lecture will address Anna Maria Tremonti’s journalism career as well as journalism in the era of ‘fake news’ and the wariness of the so-called mainstream media.

Anna Maria Tremonti has been the host of CBC Radio One's The Current since its start in 2002. The program marked her return to radio after nineteen years with CBC Television, including two years as host of The Fifth Estate. She was a foreign correspondent for The National for nine years and has been awarded a number of awards, including two Geminis and a lifetime achievement award from Women in Film & Television Toronto.

*PLEASE NOTE, THE LECTURE IS NOW FULL. IT IS BEING LIVE STREAMED HERE: https://youtu.be/bZx8mRWjL_8.