Exhibition: A Tradition in Transition: Lithography in Islamic Cultural History 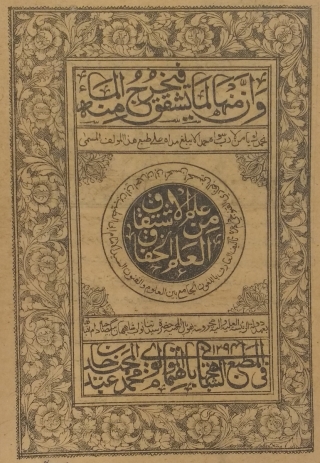 During the last decade, the field of Arabic and Islamic studies focused on the revaluation and rediscovery of an extensive amount of sources, mainly in manuscript form, that bear witness to hereto neglected aspects of Arabo-Islamicate cultural history. More specifically, the re-appreciation and the unprecedented analyses of these manuscript documents has fostered the reassessment of outdated narratives surrounding the evolution of various Islamic disciplines, such as linguistic sciences (al-ʿulūm al-lughawiyah), logic (manṭiq) and rational and philosophical theology (ʿilm al-kalām and ḥikmah), mathematical and astronomical sciences (al-riyāḍiyāt, ʿilm al-hayʾah), and Quranic exegesis (tafsīr) and legal methodology (uṣūl al-fiqh). Accordingly, scholars in these fields of the Islamic intellectual tradition are paying increasing attention to unveiling this manuscript tradition. However, the majority of these sources are not available in modern editions, and access to a considerable part of these manuscript forms can often be hindered by various kinds of obstacles. Scholars and researchers are therefore often forced to limit the range and scope of their research according to the accessibility of that manuscript heritage.

It is however less known that in between the 19th and the 20th centuries, a good amount of that manuscript heritage has been produced and circulated in the form of lithographed copies, mainly within madrasa networks in the Arab world. Lithography in the Arabo-Islamicate intellectual panorama was more welcomed than typography because of several religio-cultural and socio-economic reasons, and filled an important gap between the manuscript and printing tradition that would follow. Lithography was still tightly bound to traditional handwritten manuscript production while offering the advantages the printing technology. Many among the most relevant works on linguistic sciences, rational and philosophical theology, mathematical and astronomical sciences, Sufism and Quranic exegesis and juridical methodology, executed by professional scribes and supervised by trained scholars, have become the tools of the madrasa tradition. The tradition and the production of lithographed books has received little attention despite their number and  relevance to the Islamic intellectual tradition Scholars and researches in the Arabo-Islamicate tradition are thus often unaware of not only the existence of lithography but also of their relative accessibility. Accordingly, a rigorous and thorough investigation into the tradition of the Arabic lithographed books will undoubtedly benefit many scholars in various fields of research.

A Tradition in Transition: Lithography in Islamic Cultural History is accessible on the 1st floor of the Islamic Studies Library during opening hours.