Exhibition | If Walls Could Speak: the History of Morrice Hall 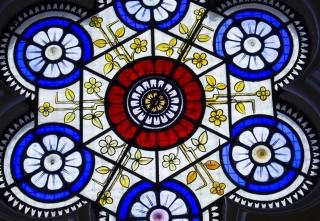 Although most of the Islamic Studies Library's previous exhibits have aimed to showcase the themes, works and wonders contained in the Library, the current exhibit, If Walls Could Speak, explores the history of the physical structure that houses this unique collection: Morrice Hall.

While Morrice Hall is currently home to McGill’s Islamic Studies Library, the Institute of Islamic Studies, as well as the English department’s Tuesday Night Theatre, it has housed a diverse range of tenants since its construction in 1882: from faculty and students of the Presbyterian College, to wounded soldiers returning from war overseas, to members of the International Labour Organization seeking a safe space to work during war-time.

The early history of Morrice Hall is closely tied to that of the Presbyterian College of Montreal, as it was constructed as an extension to the original College building, itself built in 1873 and later demolished to make way for the brutalist tower that is the Stephen Leacock building. Also, the Hall is named in honour of Mr. David Morrice, then-Chairman of the College’s Board of Management, for the generous donation of $ 80,000 that he provided in 1880 to have the structure built. In 1961, following a property exchange with McGill University, the Presbyterian College moved out of the two buildings on McTavish St., and into its new site on the corner of University Ave. and Milton St., where it remains today.

This exhibit – a mixture of photos, publications, plans, and maps spanning 135 years – will take you through the major moments in the history of Morrice Hall: from its foundation, to expansion, to the interruptions of war, to the demolition of the original building, to the renovations that have created the space it is today in 2018.