Exhibition: Across the Channel: English literature on the Continent in the 18th century 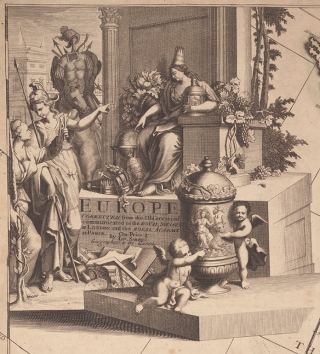 Please note: This exhibition is accessible during opening hours.

Despite the absence of well-established international distribution channels and networks, English literature was widely available to European readers during the 18th century in both English-language editions printed in cities all across the Continent and in translations and bi-lingual editions.

This exhibition is built around the works of a number of authors including novelists, poets, essayists and philosophers, some of whom are major figures and others now hardly known, but all of whom had their works circulating on the Continent. Three authors – Oliver Goldsmith (1730?-1774), Laurence Sterne (1713-1768) and Frances Burney (1752-1840) – are
representative of the whole. In the case of Goldsmith, his novel The Vicar of Wakefield is present in multiple editions and what is of particular interest is how many places in Germany saw its publication and how many of the French editions were printed in England. Sterne was a particular favourite in German-speaking countries but was also popular in France and in
Sweden, as the Lund edition testifies. Burney’s first three novels, in particular Evelina, enjoyed wide popularity and appeared in English editions and in translations across the Continent; there are some sixty recorded lifetime editions of the novel.

In response to the theme of this year’s SHARP Conference – “How do books, book cultures, or book systems spread and readapt?” – this exhibition can only begin to suggest the multitude of questions that these editions pose. Why were English language books being printed in Vienna? Why was The Vicar of Wakefield so popular and what do the German English editions say about language learning? What was the attraction that Pope held for continental readers? Why did English novels attract so many non-English readers? Or were they merely examples of sophisticated decoration?