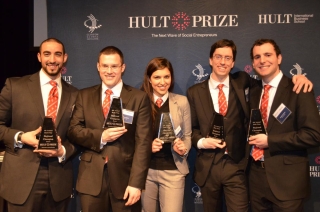 A team of five MBA students from McGill University’s Desautels Faculty of Management won the Boston Regional Finals of the 2013 Hult Prize in March for their plan to develop a manufacturing plant to grow edible crickets and decrease urban hunger. The MBA students competed against 42 other schools, including Harvard, MIT, and Yale. The Hult prize is a great start -up accelerator program dedicated to supporting social entrepreneurs. Each year, students work together to develop innovative social enterprises that aim to eliminate a social isssue selected by the committee.

McGill's MBA team plan to invest the $1 million dollar prize into launching their new enterprise. They plan to process the crickets into two edible formats. The first form is to bake the crickets whole, which are high in iron and protein; the second is to grind the crickets into a powder and mix it with existing products such as flour to increase their level of protein. The students would also like to eventually create a local ecosystem of entrepreneurs.

Team McGill will spend the next few months raising funds and will join the other regional finalists at the Hult Accelerator Incubator in Boston. The accelerator will allow them to further develop their ideas by providing a strong mentorship network. Following their time at the Hult Accelerator, they will be preparing to pitch their start-up at the annual Clinton Global Initiative meeting.

The topic of insects used in urban diets was explored by Jakub Dzamba, Ph.D. candidate in architecture, when he presented a similar approach to urban agriculture based on Third Millenium Farming (3MF) at 3 Minutes to Change the World 2012. His research is about harnessing the abilities of micro-crops (such as algae and grass) and micro-livestock (insects) to rapidly reproduce, under controlled conditions, to create meat (protein) on a significantly smaller “foodprint” than current industrial farming operations, and to provide humanity with a source of food that is sustainable, but also reflects the value of being organic, ethical and local.

We Congratulate Team McGill for their achievement and wish them continued success in the second stage of the competition at the Clinton Global Initiative meeting in September.