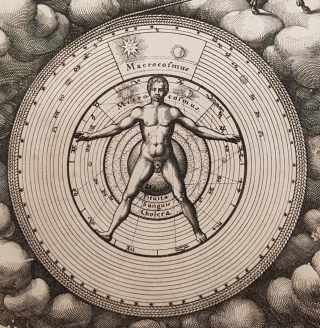 Keynote address given by Lauren Kassell, Professor of History of Science and Medicine, University of Cambridge for the Angelical Conjunctions: Crossroads of Medicine and Religion, 1200-1800 Conference.

Description: Robert Fludd, the seventeenth-century English physician whose elaborate images regularly adorn histories of science, depicted health as a fortress. In the centre, a man kneels in prayer, with an angel stationed at each of the four turrets defending him from the disease-bearing winds propelled by demons from the north, south, east and west. In a sister image, demons have broached one of the turrets, and the man at prayer now reclines in bed, attended by a physician who feels his pulse and inspects a flask of his urine. If angels guard health and demons cause disease, what is the relationship between prayer and physic? When and why should, according to Fludd and his colleagues, the doctor be called—and when were doctors actually consulted? This talk considers the relationship between medicine and religion through case studies from early modern England. It contrasts Fludd’s philosophical writings with the daily practices of Richard Napier, the astrologer-physician, to think about recurring themes in the histories of medicine and religion: relations between spiritual and material bodies, alignments between theory and practice, shared and competing understandings between patients and practitioners. Through the English examples, and their particular inflection of what we might call medical demonology, it considers broader lessons for histories where religion and medicine meet.

The keynote lecture will be followed by an exhibition of rare books from the collection of the Osler Library of the History of Medicine.