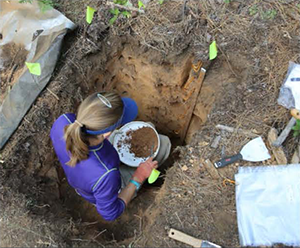 Soils store over three times as much carbon as our atmosphere, and as soils warm, they have the potential to become a large positive feedback to climate change. Over half of this organic carbon is stored in deeper soils, but most climate change experiments have only focused on surface soils. Here I explore the vulnerability of deep (>20 cm) soil carbon to climate change through a series of experiments in locations ranging from hardwood temperate forests to tropical Hawaii to agricultural fields. I have found that the response of deep soils to climate change varies greatly across these ecosystems and is likely dependent on the availability of soil carbon to the microbes that consume it. This conclusion is supported by a global meta-analysis of soil radiocarbon data among different soil fractions. Overall, the magnitude of soil’s positive feedback to climate change may be limited by the amount of easily consumed particulate carbon. However, the effect of changing precipitation regimes on soil carbon remains an open question.

Caitlin Hicks Pries is an ecosystem ecologist/biogeochemist researching how terrestrial ecosystems and soils respond to climate change and how soils can be managed to help mitigate climate change. Caitlin is a graduate of Middlebury College. She received a MSc in Soil Science and a PhD in Biology at the University of Florida and then completed a postdoc at the Lawrence Berkeley National Laboratory in Berkeley, California. Caitlin is currently an Assistant Professor at Dartmouth College where she teaches classes in Ecology and Global Change Biology. Caitlin’s research spans ecosystems from mangroves to tundra, grasslands to farmland, and tropical to temperate forests. She has won early career awards from the Soil Science Society of America and the Biogeosciences Division of the European Geosciences Union. She is an active contributor to the International Soil Radiocarbon Database working group and a member of the terrestrial biogeochemistry advising committee of the National Ecological Observatory Network.