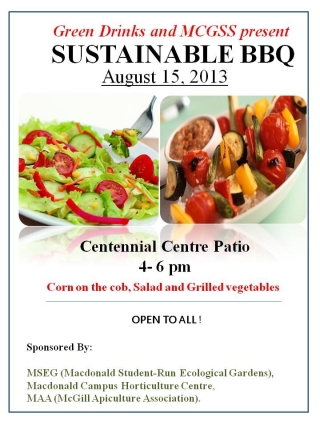 Since the Sustainability Projects Fund's inception many projects have been successfully implemented to further green McGill. Students and staff have been sensitized to environmental issues and continue to think of ways to further make events and daily operations more sustainable.

One set of events that may been overlooked are the many barbecues that occur in various departments during the spring, summer and fall. In the early 2000s, Oak Ridge Laboratory estimated that a charcoal grill emits 11 pounds of carbon dioxide hourly. A gas grill emits half as much, at 5.6 pounds. Charcoal also releases more than 100 times as much carbon monoxide as gas.

Carbon dioxide emissions are not the only environmental concern. There’s also how the fuel for the conventional barbecue is produced, its additives and disposal, as well as other harmful pollutants involved in the grilling process. For example, grilling with standard charcoal briquettes will generate soot or particulate matter, a harmful pollutant that exacerbates asthma and other respiratory illnesses. The lighter fluid used with charcoal also emits volatile organic compounds (VOCs), a contributor to ground-level ozone. According to the US Department of Energy, the estimated 60 million barbecues held on the Fourth of July alone consume enough energy in the form of charcoal, lighter fluid, gas and electricity to power 20,000 homes for a year; while burning 2,300 acres of forest and releasing 225,000 metric tons of carbon dioxide into the atmosphere.

For an even smaller carbon footprint and a healthier barbecue, one can add some locally grown and/or organic ears of corn, asparagus, peppers and other vegetables; they have a minimal environmental impact when grilled and will limit your exposure to the bacteria in possibly undercooked meat.

Our main goal is to demonstrate to people that a great barbecue can be done with locally grown produce that for the most part have been produced sustainably. After all, it is the veggies that really make a good barbecue a great one!