Out of the classroom and into the rainforest 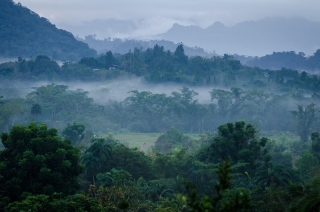 Beth Turner’s fridge holds beer, cheese, milk, tomatoes, cucumbers – and more than 1,700 bugs. The bugs are macro-invertebrates, small spineless aquatic organisms that Turner collected from streams in Panama for a research project looking at the effects of deforestation on the health of the streams. Turner scooped up the specimens this past winter and dropped them into glass vials of ethanol, which she packed into cardboard boxes and stored in the fridge she shared with four other students.

In her living room, she built a lab consisting of dissecting microscopes and a 1.7-kilogram guide to aquatic insects of North America, and taught herself how to identify the family to which each creature belongs. “My favourite is Collembola. We hardly ever see it, and I think they’re kind of cute,” says Turner, a fourth-year biology student. “This one’s kind of interesting,” she says, pulling a vial from a box. “Look at his lower lip, it’s a big floppy thing.”

Turner was one of 25 McGill students and three University of Panama students enrolled in the 2014 Panama Field Studies Semester (PFSS). The program immerses students in the biology, ecology, and culture of Panama for four months during the winter semester. To those familiar with Montreal winters, it may sound idyllic. But the pace is intense.

The students take upper-level courses in biology, agriculture, environmental science, history and geography taught by professors from McGill, the Smithsonian Tropical Research Institute (STRI), the University of Panama and the Universidad Católica Santa María La Antigua. They criss-cross the country, learning about tropical environmental and livelihood issues from indigenous groups, farmers, and villagers. They also intern with research institutions and NGOs on local projects, sometimes spending hours commuting by bus to their sites. What little downtime they have is spent doing laundry, grocery shopping and writing papers for each class.

“They are learning at all levels of their cells,” says Catherine Potvin, a plant biologist specializing in tropical forest ecology and conservation in the Department of Biology. She is also McGill’s Canada Research Chair in Climate Change Mitigation and Tropical Forests. Potvin created the PFSS 15 years ago. The program is a joint venture between McGill and the STRI. Potvin wanted to establish a field program in tropical ecology where students could learn first-hand how to do culturally relevant research. “I realized that we were absolutely not preparing our students for working in developing areas or tropical countries,” says Potvin. “I felt that it was only by bringing people into Panama that we could train them adequately.”

But Potvin has an even deeper motivation. For 21 years, she has studied land-use change, biodiversity conservation, and climate change mitigation in Panama. She has partnered with indigenous groups in the country to learn from them, in order to find ways to blend traditional livelihoods and cultural values into globally relevant conservation goals. “We are all sharing this planet. If we want to maintain this beautiful blue planet, we in the north need to understand how the people in the south are working in the biosphere, and that’s impossible to teach from a classroom in Montreal,” she says. “We can’t resolve these big environmental issues alone.”