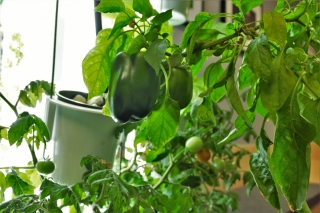 Hidden away on the fourth floor of 1010 Sherbrooke St. W is not only an integral student resource, but also a sustainable haven filled with freshly grown produce. McGill’s Office for Students with Disabilities (OSD) is now home to a vertical hydroponic growing system from Nutritower, a Montreal-based company founded with a mission of providing fresh produce year-round.

OSD employees and student Access Ambassadors committed to improving accessibility initiatives on campus tend to the Nutritowers. Once ready, the produce harvested from the Nutritowers, which includes peppers, cherry tomatoes, cucumbers, lettuce, and herbs such as basil and cilantro, will be donated to McGill’s Midnight Kitchen, a non-profit collective run primarily by volunteers with the aim of providing accessible food to as many people as possible. The produce will go towards the collective’s free-meals initiative, which provides members of the McGill community with by-donation, bring-your-own-dish, vegan lunches every weekday.

McGill’s Sustainability Projects Fund – the largest fund of its kind in Canada – financed the purchase of the towers.

OSD: A sustainability leader on campus

Having hosted Sustainability Fridays programming and Sustainable and Accessible Event Trainings in the past, the OSD acts as a sustainability leader at McGill.

“As OSD staff, we thought the Nutritower’s multi-levelled design allowed for gardening from a variety of heights, seated or standing, and would be a fantastic opportunity to create community, promote wellness and sustainability on campus,” said Rachel Desjourdy, Access Advisor with the OSD. Desjourdy worked to put together the initial Sustainable Projects Fund application.

The newly-installed Nutritowers not only cultivate fresh produce throughout the cold-winter months, but also powers several full-spectrum grow-lights which help to combat the adverse effect of the lack of sunlight during the dark winter months. These lights are especially helpful to individuals who face seasonal affective disorder (SAD), depression and other mental illnesses.

When picturing the concept of sustainability, many people envision improving the physical environment through actions such as reducing carbon emissions and eliminating waste. While preserving the Earth’s environment encompasses a large part of sustainability, social sustainability and accessibility also play an important role in fostering sustainable communities. With funding from the Sustainability Projects Fund, the OSD is using the Nutritowers to further their mission of making their workplace and McGill’s campuses as socially sustainable as possible.

“The OSD believes that accessibility is integral to social sustainability, and would like to see the campus integrate these concepts as we promote sustainability at McGill,” said Desjourdy. “It would be great to see other offices take on more accessible practices – accessibility in websites, forms, workshops – in conjunction with other sustainability measures.”

Sowing the seeds of sustainability

The OSD has also hosted a number of workshops and events focused around the intersection of accessibility and sustainability, using the Nutritowers as a starting point. In February, the office held an informational Gardening Lunch and Learn in which students were invited to learn about the Nutritower’s hydroponic growing techniques over lunch. The OSD also co-hosted the Unwind with Indoor Gardening Event on April 15 which marked the installation of another Nutritower system in the Brown Building. The event allowed members of the McGill community to unwind during the exam season while helping to sow the first seeds for the new indoor garden.

The OSD believes that the Nutritowers could be an impetus for change in McGill office culture through emphasizing local food production and healthier workspaces.

“Every person coming into the OSD sees the Nutritower – those just visiting for appointments or meetings passively benefit from the presence of plants, and the lights on the tower,” explained Desjourdy. “Visitors are enthusiastic about the growth and progress the little plants make, and being greeted with budding plants is always a fun welcome.”

To learn more about the Office for Students with Disabilities and to receive updates about their Nutritower, visit the OSD on Facebook.