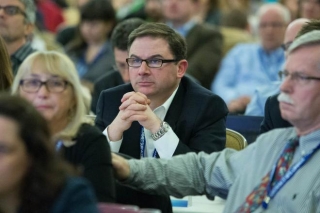 The global transition to clean energy is underway and Canada is lagging, experts speaking at the Broadbent Institute's Progress Summit said Saturday.

Published on March 29, 2014 | The Hill Times
by Laura Ryckewaert

Governments and economic leaders around the world are increasingly speaking out about the economic impetus to address climate change and the need to shift to green economies, but Canada is dragging its feet and investing money and attention into further developing existing, traditional energy sources, experts said Saturday at a Broadbent Institute summit panel on green economies.

“There are many people who think we can only have a greener economy by having less of the other things, and other people who think we can have more of the innovation and prosperity but only by having a less green economy. I think that’s fundamentally wrong,” said panelist Chris Ragan, associate professor of macroeconomic and economic policy at McGill University in Montreal, adding the two sides need to stop being pitted against each other.

The Broadbent Institute’s first-ever Progress Summit is being held at the Delta hotel in downtown Ottawa from March 28-31. On Saturday, Mr. Ragan, Bruce Lorrie, president of the Ivey Foundation, Tom Rand, Cleantech adviser at the MaRS Institute, and Clare Demerse, a fellow with the Broadbent Institute and director of federal policy at the Pembina Institute, took part in a discussion on “The (good) business of building a green economy.”

Panel moderator Jeremy Runnals, managing editor of Corporate Knights magazine, said it doesn’t take a hard look to see that change is underway globally when it comes to economic policies and the environment. Over the past year-and-a-half, global economic leaders, including International Monetary Fund director Christine Lagarde, have spoken out about the economic impetus to address climate change, he said.

Read the rest of the story here.