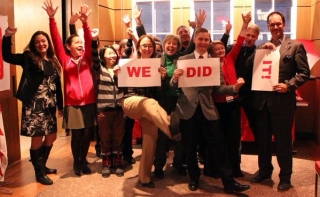 Are you looking for an opportunity to step outside the Roddick Gates and make a difference in the greater Montreal community?

By using your talents for the benefit of Centraide (known as the United Way in other parts of North America), you will be lending a helping hand to over 360 agencies – and 500,000 vulnerable Montrealers – supported by this independent philanthropic organization. In 2014, McGill led a record-breaking campaign for Centraide, raising over $468,000 and earning the distinction of being the most successful institutional campaign in Montreal in terms of increased participation and donations.

Now, we are looking for motivated, fun-loving, and results-oriented people to join the 2015 McGill-Centraide Organizing Committee.

Mandate of the McGill-Centraide Organizing Committee

This committee, made up of staff and faculty from across McGill, is tasked with organizing fundraising events and initiatives for the duration of the campaign (September 29 to December 4, 2015). Committee members are the ambassadors for their units throughout the campaign and, as such, will support and encourage participation in special events, set goals for participation and contributions that fit your unit, and coordinate internal publicity and promotion.

Throughout the campaign, the McGill-Centraide Campaign Planning Team, located in the Office of the Vice-Principal (Research and International Relations), will provide you with materials and guidance in all aspects of your activities.

Summary of the work and profile of the committee members

Volunteer members of the McGill-Centraide Organizing Committee are asked to:

Help make a difference in your communities

We invite you to feel good about your University and the difference you will make in the lives of your neighbours, co-workers, family and friends by joining the McGill-Centraide Campaign Organizing Committee.

Express your interest by email, including your full name, unit and contact information to karen.kinsella [at] mcgill.ca (Karen Kinsella) no later than August 28, 2015.

Questions? Don’t hesitate to contact the McGill-Centraide Campaign Manager, Brett Hooton, at brett.hooton [at] mcgill.ca or 514-398-8585.